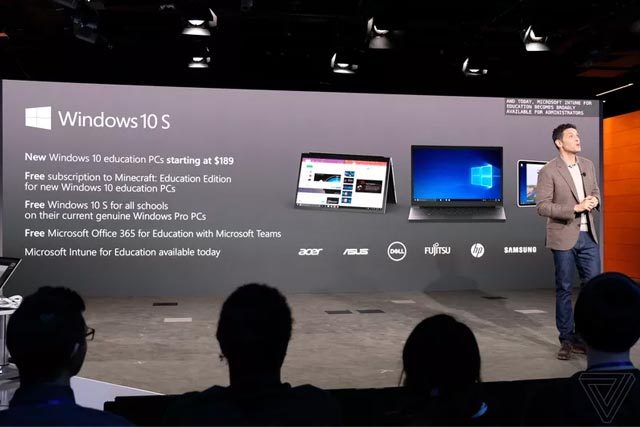 Microsoft is introducing a new version of Windows 10 today: Windows 10 S. It’s essentially Microsoft’s answer to Chrome OS, to simplify Windows for low-end hardware and in particular, the education market. “Everything that runs on Windows 10 S is downloaded from the Windows Store,” says Microsoft’s Windows chief Terry Myerson. That doesn’t mean that desktop apps won’t run on this version of Windows 10, but they’ll need to be specially packaged and listed in the Windows Store. During a demonstration onstage, Myerson showed off the ability to support peripherals and devices just like regular Windows 10. Myerson also noted that Microsoft has “streamlined” the default wallpaper for Windows 10 S, a strange change to note during Microsoft’s keynote. “Windows 10 S will run any browser in the Windows Store,” says Myerson, hinting that if Google is willing to list Chrome in the Store then it will be available on devices that run Windows 10 S. Without Chrome, Microsoft has obviously focused on its Edge browser and in particular education sites and web apps. Microsoft is really aiming this at the education market, and its goal with Windows 10 S is to have a wide range of PC partners creating devices that run this new variant of Windows 10. Devices will start at $189 this summer, and all machines will ship with a free subscription toMinecraft: Education Edition. Windows 10 S will also be free for all schools that are currently running Windows 10 Pro PCs, and include free Office 365 education with Microsoft Teams. 7 Health Benefits of Owning a Trampoline

5 Most Profitable Fiverr Gigs You Can Sell to Make Money

Want to be a Smart Trader? Attend Free Workshop By FinLearn...