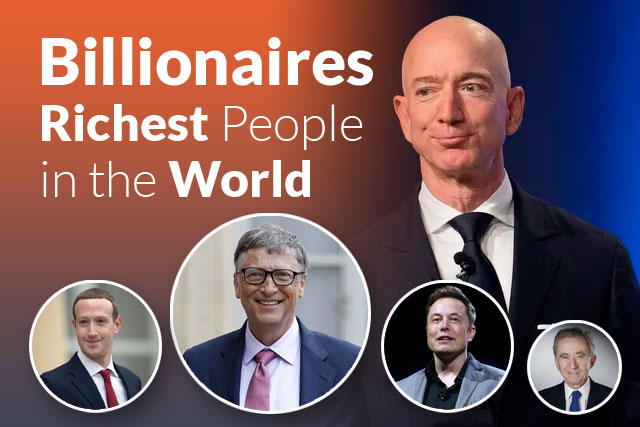 Are you interested in knowing who the richest people in the world are, their net worth, and how they have managed to be on the top?

The King of Timbuktu, Mansa Musa 1 of Mail, is considered the wealthiest person to have ever lived. He had a net worth of $400 Billion.

All the Billionaires have earned all of this fame and wealth by sheer determination and passion. They had an idea in mind and just came up, implemented it, and waited with patience to see the results.

We will discuss the top 15 Richest People in the world in this article and how they have built such a significant net worth. Just keep reading.

Jeff Bezos is undoubtedly the richest man alive. He has been on the first spot for many years with a net worth of 190 Billion Dollars. He first touched the mark of $1 Billion in 1998.

He was born in 1964 and is currently 56 years old. He is the founder & Chairman of Amazon. He started Amazon as a bookseller back in 1994 from his garage. He also owns the Washington Post newspaper and has been investing a great deal in space technology.

Bill gates is a Businessman and the Founder and Former chairman of Microsoft. Bill co-founded Microsoft with Paul Allen and has an estimated net worth of $125 Billion. He only owns 1.3% of Microsoft and funds a large amount of his wealth to charities.

He is a programmer and used to view every code before sending it. Now he focuses more on his Philanthropist work.

He is the CEO of Space X and Tesla Motors. He owns 54% of Space X and 22% of Tesla. He also founded Paypal, a money transferring company, and is being used very efficiently worldwide.

He was born in 1971 and is currently 49 years old. He has said that 99% of his wealth is invested in Space X and Tesla and also is in dept to two worth people more than $400 Million.

Bernard is a French Billionaire with a net worth of $111 Billion, made due to the luxury product companies. He is the Chairman of LVMH, Louis Vuitton.

He was born in 1949 and is currently 71 years old. He has shares in Christian Dior, Hermes, and Carrefour. His primary fortune maker is Christian Dior, as they hold a 41% share of it. LVHM also owns 75 different brands, including Louis Vuitton, Rihanna, Henessy, etc.

Mark is the Youngest Billionaire in the list of top 100 wealthiest people. He has a current net worth of $100 Billion that he attained this year in august. He is well known for the formation of Facebook and is the mainstream of income for him.

He was born in 1984 and is currently 36 years old. He now also owns Whatsapp and Instagram, the most used social media. He founded Facebook with three more people and dropped out of Harvard to work on Thefacebook, now known as Facebook.

Mukesh is an Indian businessman with a net worth of $85 Billion. He is the chairman of Reliance Industries. He is the owner of Mumbai Indians.

He was born in 1957, and according to today’s date, he is 63 years old. His primary source of wealth is due to his shares in Reliance industries. He has also signed a few deals with Facebook and Google.

Warren is considered to be the biggest investor of all time. He has invested in many companies and today have achieved a net worth of $83 Billion. He bought his first stock in 1941.

He was born in 1930 and is 90 years old, making him the oldest billionaire in this list. He has pledged to give 99% of his wealth to charity when he dies. He is the CEO of Berkshire Hathaway and owns 18% of the company. It is his primary source of income.

Steve is a well-known businessman, and his fame is mainly due to the Los Angeles Clippers’ ownership. He has a net worth of $81 Billion and is primarily due to his shares in Microsoft.

He was born in 1956 and is 56 years old. He remained the CEO of Microsoft for4 years. He was 333.3 Million shares in Microsoft due to which he is a billionaire today.

Larry is an American businessman with a net worth of $79 Billion. He is the founder of Oracle and also its former CEO.

He was born in 1944 and is 77 years old. He founded and made Oracle public just one day before Microsoft did. He has 22% shares of Oracle and is his primary source of net worth.

Larry is an American businessman with a net worth of $77 Billion. He is the co-founder and former CEO of Alphabet Inc, the company that owns Google.

He was born in 1973 and is currently 47 years old. He co-founded Google with Sergey Brin when they were graduate students. They both sold it after a few years. His primary source of income is due to his 6% stake in Alphabet inc.

Sergey is a Russian-born billionaire with a net worth of $75 Billion. He is the co-founder of Google, made when he was a graduate.

He was born in 1973 and is 47 years old. He is currently the head of Alphabet Inc, the company that owns Google. His primary source of net worth is due to his 6% share in Google.

Vladimir is a Russian politician with a net worth of $70 Billion. He is currently the president of Russia, the term that began in 2012.

He was born in 1952 and is 68 years old. He bought many shares and stakes in companies that helped him increase his net worth to such a point to be in the top 20 wealthiest people.

Francoise is the richest woman alive with a net worth of $66.7 Billion. She is an author and heiress.

She was born in 1953 and is currently 67 years old. She is the board member of L’Oreal. She is the daughter of Lillian Bettencourt and heiress of L’Oreal.

Mackenzie is an American novelist and activist with a net worth of $65 Billion. She helped Jeff establish Amazon, previously known as Cadabra.

She was born in 1970 and is currently 50 years old. She and Jeff launched Amazon just one year after their marriage. Mackenzie got almost 20 Million shares worth nearly $36 Billion from jeff as a divorce settlement that increased her net worth to such a point.

Alice is the daughter of Sam Walton, Walmart’s co-founder, and has a net worth of $66 Billion. She provided investment services, and despite having a stake at Walmart, she carved her own path.

She was born in 1949 and is currently 71 years old. She is Walmart’s heiress but had worked hard to be on the list of the top richest people. She is also the former CEO of Llama groups that closed down in the 1990s.

The life and struggle of all these people teach us that age is just a number, and you can achieve anything you want to. Just be confident and patient, and time will give you its reward.

There have been many billionaires in the course of history, but the current ones are enlisted above. Do check them out.