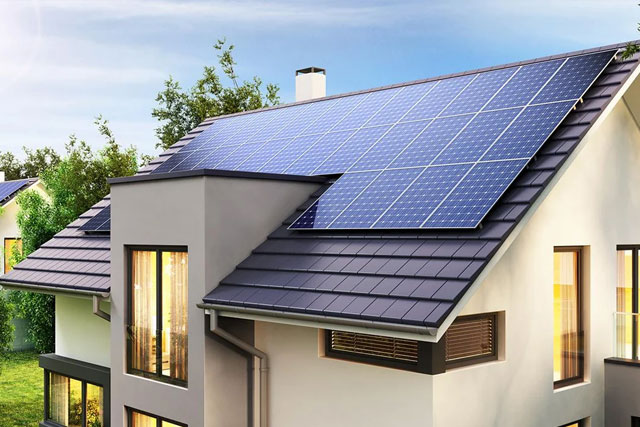 What is solar energy? It’s been a buzzword since the first practical solar cell was invented in 1954.

Leaps and bounds have been made in the development of solar technology since then and there are lots of solar energy interesting facts to share.

How Does Solar Energy Work?

Sunlight contains light particles called photons. When the photons in sunlight hit the cells in a solar panel they cause a chemical reaction.

This reaction causes electrons from overcharged atoms to be knocked loose, generating energy that is converted into electricity.

Because it is the photons from the sunlight that cause the reaction, your solar panels will still produce electricity (though not as much) even when it’s cloudy, snowing, or raining!

When considering cool facts about energy efficiency we have to give a shoutout to the sun for providing our most abundant renewable resource!

Around 173 terawatts of solar energy hit the Earth constantly. At more than 10,000 times the world’s total energy usage, this is a huge potential resource.

No matter where you live there is potential to tap into this resource!

In 2008 the solar capacity of the United States, how much energy our nation produced via solar energy, was just .34 gigawatts. It has now grown to around 97.2 gigawatts! That is enough energy to power about 18 million homes, but still represents only 3% of our energy needs.

Being such a fast-growing market, it is worth noting in our solar energy facts that as solar production and installation have increased, so has the number of people employed in this industry.

In a highly competitive market, be sure to do your research and find a solar panel installation company that will work for you!

Solar energy is an increasingly popular trend and will be a valuable asset when selling your home.

There are reports from National Renewable Energy Lab that you can potentially get a 20 to 1 return on your investment. Zillow reports an average increase of 4.1% in home prices for homes with solar.

Shortly after the development of a practical solar cell in 1954, the space industry began using solar technology to power spacecraft.

The Vanguard I is not only the oldest satellite still in orbit around the earth, it was the first to use solar cell power.

Solar energy fact of the day: as our resource with the most potential, considering solar energy for your home is more than just trendy! You will not only help the environment but there is great potential for energy savings and a return on your investment.

Check out other articles on our site for more information on a variety of topics!

4 Ways to Protect Your Startup’s Success