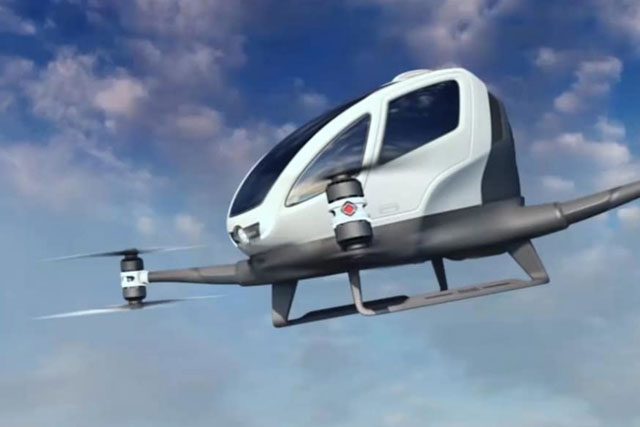 An autonomous drone that can transport humans will start ferrying passengers around Dubai this summer.

The head of Dubai’s transportation agency said that self-flying taxis would start taking people across the city starting from July. The city will use the Ehang 184 for the airborne service. The Ehang is a drone that can fly without human direction and carry a single passenger and their bag. It can take one person on a journey up to 23 minutes long.

“This is not only a model, we have actually experimented with this vehicle flying in Dubai’s skies,” said Mattar al-Tayer, head of Dubai’s transportation agency. Dubai isn’t the first city to show an interest in using the Ehang, first unveiled at CES in 2016, as part of its transport system. Las Vegas announced last summer that it would start trialing the drones for public use.

The Ehang is electric-powered and can travel for about 31 miles with a person and bag that weigh up to 100kg. It can go at speeds of up to 63 miles an hour and takes two hours to charge fully.

To call for a flying taxi all passengers will need to do is enter their destination into an app. The drone then maps the route and transports the passenger to their destination. It can’t fly directly but has to hop from one set landing spot to another.

Its propellers fold inwards as it lands so it can fit in a single car parking space.

Designed to be secure, the autonomous vehicle has a “fail safe” system, according to the company, that prompts it to land in the nearest place if anything malfunctions or disconnects. It also communicates via encrypted channels.

Shop The Best LG Smartphone in Auckland Online On Discounts