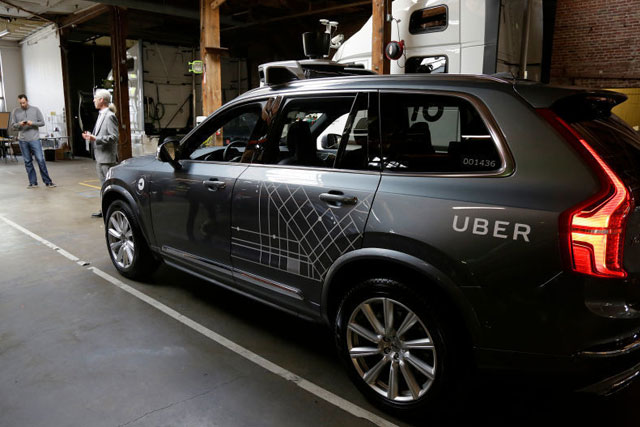 I attended last week’s opening of Intel’s big new Autonomous Driving Lab in Silicon Valley, and it is an impressive effort. One of the most interesting parts is that the garage in the lab was built for a past CEO of the firm Intel acquired in order to challenge for technology leadership in this space. The chief clearly didn’t want his four-wheeled baby left out it the sun.

However, car residual prices are collapsing, based on an alert that crossed my desk last week, and it struck me that we haven’t considered much the secondary impacts of having self-driving cars, and the changes that will result from turning automobiles into four-wheeled elevators.

I’ll address that this week and close with my product of the week: an amazingly fun Windows 10 math teaching application that I wish I’d had when I was a kid.

Many industry players are treating self-driving cars much like you would a feature such as cruise control: a nice-to-have option that will make driving much easier and safer.

There are a lot of industries that will be impacted by this, though, both positively and negatively — not the least of which is the car industry itself, which could find the majority of car companies either vastly changed or out of the market entirely.

This is perhaps the least obvious change, but with 35K deaths attributed to them each year in the U.S., car accidents have been a huge source of organs for those who need them. Self-driving cars will massively reduce those deaths to near zero, and that could result in a huge imbalance between those who need organs and the available supply. It could lead to a sharp price increase for organs and likely a huge increase in illegal harvesting, particularly in regions where this is already a problem.

Efforts to create a cloned alternative in the U.S. have been hampered by the religious right. That could result in a distinct and massive spike in illegal organ harvesting in the U.S., and a huge push for people who need them to go to countries that don’t have these restrictions in order to save their lives. This is big enough that it could have a massive impact on which party is in power.

There recently have been reports that the used car market is beginning to collapse, which is having an adverse impact on car lease and car payment rates because residuals on cars appear to be dropping rapidly.

The cause is thought to be Uber (though part of it could be a hot stock market which may be pushing some typical used car buyers to new cars). Uber plans to massively increase its service coverage once it can use autonomous cars.

This massive increase should reduce the demand for cars massively, on top of the massive reduction in demand for cars that can’t do self-driving (which are expected to be banned in a few years on many roads).

That means not only that there will be an increasing inability to resell cars that don’t have self-driving capabilities, but also that large numbers of people will feel they don’t need cars at all.

If you think about it, fully self-driving cars are like rolling elevators, and in areas covered by services like Uber the cost will be very low and the availability very high. They come without insurance, without parking or fuel charges, and without the need to garage or pay for parking.

The cost reduction for going to a service like Uber, which may provide subscription services — a monthly fee for all you can ride — should be massive. What that suggests is that the market for new cars should collapse in favor of Cars as a Service. Only the very rich will own cars, as a sign of status.

I am surprised that the car companies aren’t all joining Toyota in an IBM-like strategy to create cars that use an autonomous car approach called “Guardian Angel,” which enhances the driver’s capabilities but does not completely eliminate the driver like the Uber and Google approaches do. It’s one possible way to preserve their market.

The massive reduction in accidents should eliminate much of the need for litigation, both civil and criminal. That change also will impact insurance. I’ve seen models that suggest car insurance revenues will decrease in the 90 percent range, largely because much of the risk will be mitigated.

The need to have car insurance — outside of firms like Uber, which either will buy in volume or self-insure — should evaporate. If most folks don’t own cars, they won’t need to insure them.

Media consumption should increase dramatically, because folks who currently are driving to work and unable to consume visual media or read books during their commute will be able to do so.

Many will choose to work either coming or going, but most likely will use at least some of the time to watch movies, play video games, or read books and magazines.

With the combination of cars with massive numbers of sensors (including cameras), centralized tracking, and near constant oversight, traffic cops should become redundant. Both on-car and in- street tracking systems will report folks who are misbehaving in real time, and folks who are behaving badly and overriding or not using self-driving will receive tickets in the mail or have law enforcement waiting for them at their next stop or home.

The need to put police on the roads should evaporate, except for extreme measures like catching terrorists or robbers. This need likely could be met with weaponized drones designed to eliminate the related threat from the air, and that could respond quickly from centralized depots.

Given that many of these cars will be operating 24 hours a day and 7 days a week, the likelihood of an on-road failure will go up, needing a service that can repair the autonomous car where it failed.

Much like support for other technology products is outsourced to firms specializing in that service, this too could lend itself to service companies that can span service providers, allowing higher economies of scale, better coverage and lower costs.

The easiest system would be an automated service that retrieved the car and delivered it to a regionalized repair depot. You wouldn’t be abandoned — a replacement car likely would pick you up long before the repair vehicle arrived. In fact, given an early warning, it likely would be dispatched before you were stuck.

Autonomous cars are basically rolling appliances. With the Uber model, they are also electric. They don’t get into accidents, and increasingly, you won’t own the vehicle, so why would you need to fix the engine or repaint the body?

Granted, there likely will be road damage and repair needs, but they likely will be done by large shops designed to handle Uber-level volumes, or an automated centralized service that probably could do both kinds of repairs in-house.

To keep cost down, low-cost replicable body panels and Gorilla Glass likely would reduce dramatically both the need for and cost of repairs.

Autonomous cars represent a massive game change for the car industry. The biggest driver is that this technology could save nearly one and a half million lives worldwide each year. Basically, the long-term plan is to change cars from what they are today into four-wheeled elevators.

On the positive side, this will save a massive number of lives and free time up for folks to be more productive or enjoy media. However, it also will lead to massive reductions in industries that make their living off the older model.

Self-driving cars are just one aspect of what many are calling “the second industrial revolution,” and likely only the tip of the iceberg when it comes to the changes robotics and artificial intelligence are likely to bring.

I also attended the Microsoft education event last week, and while I did fall in love with the Surface Laptop the company launched, the product that just set me back on my heels was from Fluidity Software’s webFluidMath.

Like many guys, I’m pretty good with math, but this offering targeting K-12 students provided one of the most fun and capable methods for teaching kids math I’ve ever seen.

Using touch and a low-level AI, the result is a whiteboard space where you can draw figures like triangles and have the system immediately not only render them accurately but also generate the angles and tables that define them.

You even can draw cars and the calculations that define the old “if a train traveling at, etc.” problems, and not only see how the result was generated but also create animated simulations of the trip — both individually and across models. In short, you easily can create train drag races and see the math.

A younger me would have played this like a video game and likely ended up far more capable with algebra and geometry in a relatively short time. Making math fun is a critical part of improving STEM skills, and webFluidMath does that.

Granted, it requires a touchscreen computer to work, but it really is the first product I’ve seen that combines artistic skills, math and a touchscreen into something that truly moves the math skill ball forward.

It also would be a useful tool for adults who struggle with math. Making math fun is critical to our future, I think, and thus webFluidMath is my product of the week.

This post was originally published on: Tech News World