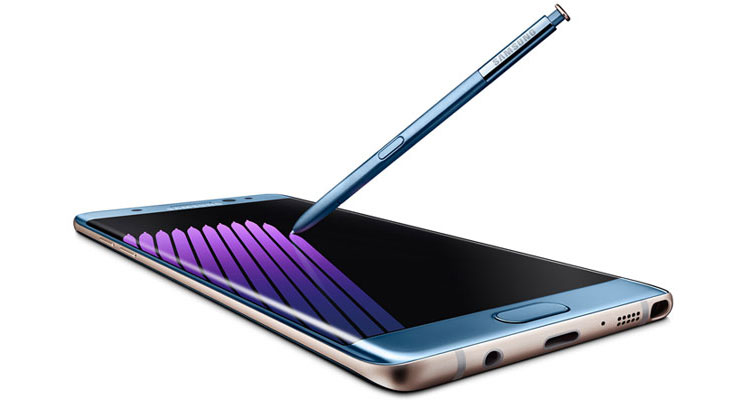 It has an iris-scanning feature that combines with Samsung Knox for security, as well as a fingerprint scanner.

The Galaxy Note7 has a water resistant body, a 5.7-inch QHD Super Amoled screen with a front-to-back symmetrical dual-edged curve, HDR video-streaming capabilities for immersive entertainment. It comes with an enhanced stylus.

It has a rear dual-pixel 12-MP OIS camera and a front 5-MP camera, both with a focal length of F1.7. It has an octacore processor consisting of one 2.3-GHz quad processor and one 1.6-GHz 64-bit 14nm processor.

The Galaxy Note7 has 64 GB of internal memory and a microSD slot that supports cards with capacities up to 256 GB. Purchasers will get up to 15 GB of storage on the Samsung Cloud.

The phone will hit the streets Aug. 19. Pricing was not disclosed.

Increasingly, flagship devices from the different manufacturers tend to have pretty much the same features.

“Samsung does this by integrating new technologies like the iris scanner, while also keeping existing features like wireless charging, even though the Note7 features a USB-C port,” he told TechNewsWorld.

The stylus is the main differentiator, Schneemann remarked. Samsung has been leading in the stylus category, and “the new features for the stylus on the Note7 will help it keep that lead. Hover translate, for example, is an interesting feature that appears to be working well.”

Carrying on the Tradition:

The iris scanner, the GIF-making tool and magnification loupe, the microSD card slot and the water-resistant body “help make the Galaxy Note7 genuinely and usefully different from competitors,” noted Ken Hyers, a research director at Strategy Analytics, who suggested its closest competitor is the Galaxy S7 Edge.

That said, “the Galaxy Note7 is evolutionary, not revolutionary,” he told TechNewsWorld. “Samsung isn’t trying to create an entirely new product, but rather enhancing and improving an existing one.”

However, the software enhancements related to the S pen and its greater sensitivity are entirely new, he observed, as is the iris scanner, which “will be a big winner for folks that want to use this device to enter the corporate office — especially for those working in fields like medical, financial, and other areas where they might be accessing sensitive data in a mobile environment.”

The Galaxy Note7 has a long list of strong points, suggested Rob Enderle, principal analyst at the Enderle Group. Among them are decent performance, thanks to Qualcomm’s strongest processor; a beautiful display; “one of the best pen implementations anywhere”; a strong camera; the USB/C port; wireless charging; fast charging; the iris scanner; and being waterproof.

The Galaxy Note7’s weak points, he told TechNewsWorld, are its high price, a battery that’s smaller than either of Samsung’s Galaxy S7 products, and the curved screen, which could make it more vulnerable to screen breakage.

“Samsung has put the best that they have into the Galaxy Note 7,” said Strategy Analytics’ Hyers. “There’s really nothing to complain about if you must have a premium large smartphone and don’t mind the price.”

The Galaxy Note7 “will do extremely well for Samsung in the second half of 2016,” he predicted.

That said, the size is a weak point, in his view. The large display will suck up power, and the battery is smaller than that of some competitors, “so if you plan to play Pokemon Go all day, bring a battery charger.”