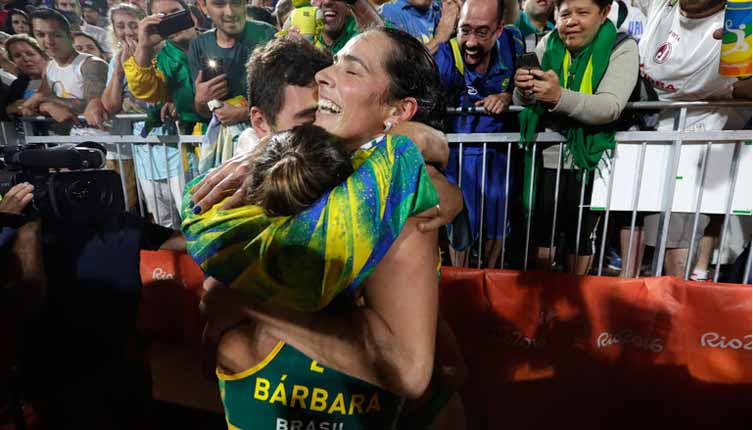 RIO DE JANEIRO — It has been a rough stretch for Brazil at these Games. Playing at home in front of loud, supportive crowds, the Brazilians endured critical losses to Argentina in men’s basketball and to Sweden in women’s soccer, and on Tuesday their top-ranked women’s beach volleyball team lost to Germany.

But when midnight struck on Copacabana, the Brazilians took their beach back.

In front of a raucous home crowd, Brazil’s No. 2 teams, Ágatha and Bárbara, knocked out the favored United States pair of Kerri Walsh Jennings and April Ross to advance to the gold medal match. Brazil’s triumph ended the gold medal run of Walsh Jennings, a three-time Olympic champion, and restored some pride in the Brazilian ranks.

Ágatha and Bárbara won, 22-20, 21-18, to earn a spot in the final against Germany (11 p.m. Eastern on Wednesday), who had beaten the top-ranked Brazilians Talita and Larissa earlier in the night.

Walsh Jennings had won three gold medals and had never lost an Olympic match. She had lost only two sets in her Olympic career before falling in straight sets at the Copacabana venue.

Earlier Tuesday, the Brazilian men Alison Cerutti and Bruno Schmidt got the home crowd fired up by beating Alexander Brouwer and Robert Meeuwsen of the Netherlands, 21-17, 21-23, 16-14, to advance to the gold medal match, in which they will play Italy.

Want all the results in Rio? Go here.

How to Watch: NBC broadcasts on a tape delay, but you can stream all the events here.