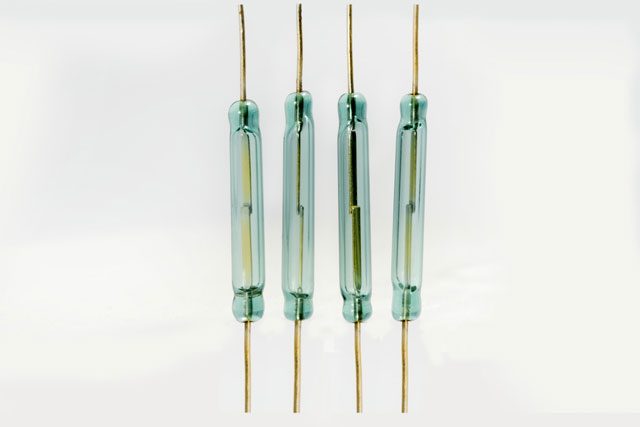 You’re probably thinking, “What is a reed switch?”

Most people don’t know what these are, but they’ve been around for a long time and many things use them. If your car has a car alarm, it most likely has a reed switch that controls it. They’re what allows things like car alarms to last for a long time.

Reed switches are important because they allow a majority of modern devices to function without using much electricity. With reed switches, people can develop a variety of things to benefit others, and there are several advantages they have.

Read on to learn more about reed switches and how they benefit us.

What Is a Reed Switch?

A reed switch is a device that was created in the 1930s by Walter B. Ellwood. It looks like a small glass capsule and has two reeds on the inside that can connect when a magnetic field is present. Over the years, reed switches have been used to power many devices.

How Does a Reed Switch Work?

Reed switches rely on magnets to function. The reeds are magnetic, allowing them to respond to magnets which will them make them open or close. The reeds will generally be open at all times until a magnet approaches.

When you place a magnet near the reed switch, the reeds will close, allowing electricity to flow. Some reed switches are designed to work the opposite way, with the reeds being closed until a magnet approaches.

The contacts of reeds consist of various metals, allowing for flexible manufacturing. The glass capsule is used to create an atmosphere around the reeds. Because of the capsule, no corrosion or sparks will occur when the reeds contact with one another.

What They’re Used For

Reed switches are in a variety of things that are used daily. One of the most common things that they’re used for is security systems. Here are some real-world applications for reed switches:

Almost all burglar systems are equipped with reed switches because they allow alarms to detect movement. If you place a reed switch on a window, the sensor will be sitting near the base. This sensor will continuously send a signal until the reed switch opens, which means the window is open.

The same switch that’s used for windows can be applied to doors. You can equip these to standard wooden doors or into keycard systems. The keycard reader will keep a door locked until you place the right card near it, disconnecting the reed switch and unlocking the door.

While alarm systems are the most popular reed switch applications, they also have a place in the medical industry. In some medical cases, doctors will have a patient take a PillCam so they can see what their digestive system looks like.

A small reed switch can be placed in the miniature cameras to preserve its power. When the probe has reached the correct area, the doctor can use a magnet from outside of the body to activate it.

Reed switches provide a plethora of benefits that make them worthwhile. For something that was created nearly a century ago, they still hold up in today’s standards. Here are the advantages of using reed switches:

They Use Less Electricity

Reed switches can run entirely without electricity. Should you get a reed switch that does use electricity, it will only be on for a short duration. You’ll be able to save a bit more on your monthly electrical costs by installing them instead of using things that are constantly running.

Unlike a lot of modern technologies, reed switches can outlast most things that are used in electrical systems. They can withstand a variety of voltages and operate in explosive environments thanks to their sealed containers.

You Can Have Safer Property

Because there is a plethora of reed switch applications, you’ll be able to equip your property with security alarms that will prevent any intruders. The moment your locked doors and windows are open, an alarm will sound off thanks to the signal from the reed switch.

They Changed the Medical Industry

Since reed switches come in various shapes and sizes, they’re able to be applied to numerous medical devices. The previously mentioned PillCam example is just one way that reed switches are helping the medical industry.

These switches can also be used in things like hearing devices because they enable manufacturers to make smaller hearing aids. The switches are also able to detect cellphones and can automatically alter the volume. Reed switches essentially help increase patient comfort.

Get Involved With Reed Switches Today

Reed switches are one of the most efficient forms of technology that have been developed. Made almost 100 years ago, these devices have changed the way manufacturers make products and they continue to influence modern technology.

If you’re someone that works in a field that uses switches to control things, you should consider using reed switches for your products. These will allow you to make smaller and more effective devices, all while using little to no electric.

By using only magnets, reed switches can send signals to devices to do tasks. They’re commonly used in security systems to set alarms and unlock doors. They also have an important role in most medical devices due to their small sizes.

After reading this article, you’ll no longer need to ask, “What is a reed switch?” Feel free to browse our tech section to read more articles about innovative technologies.

Everything You Must Know About Cancer Treatment