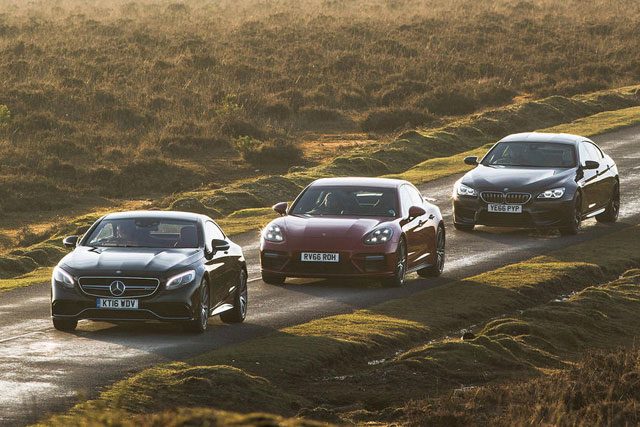 The Porsche Panamera, you’ll have noticed, isn’t your typical hot hatchback, what with it being a five-metre-long, many-doored luxury coupé. Albeit a hot one. Which makes this an unusual triple test even by the standards of an increasingly diversified car market.

The second-generation Panamera reports for this test in fast-as-it-gets Turbo form. The first Panamera was a hard car to pigeonhole but an easy one to like, being part sports coupé and part super-saloon, with Porsche keen to make it feel like a true Porsche – which meant weighty steering and areas where refinement was sacrificed to dynamics.

Less so this time around, apparently. The brief for the secondgeneration car feels broader. It’s “the first true luxury car in Porsche history”, we said when we drove it in Germany last August. In Turbo specification, the new Panamera has a 4.0-litre V8 engine producing 542bhp and mated to a responsive eight-speed dual-clutch automatic gearbox, through which it drives all four wheels. All of that lives under this vast five-door, four-seat body, with individual chairs in the rear aping those in the front. They look more like lightweight sports seats than they are. There are lots of comfort-enhancing features everywhere – enough to take the air-sprung Panamera’s kerb weight to 2070kg and its price, before options, to £113,075. Which prompts the question: what do you test it against? Hundred-and-a-bit-grand luxury five-door coupés are, perhaps unsurprisingly, remarkably thin on the ground, as evidenced by the number of times you don’t see a Panamera on the road. The action for super-saloons with the kind of grip and handling we know the Porsche offers tends to take place below this stratosphere. I suspect a Mercedes-AMG E63 saloon would give the Porsche a hard time dynamically, if not from a luxury standpoint, but it hasn’t arrived in the UK yet. And contemporary luxury saloons tend to be just that: overdosed on luxury and undernourished dynamically for a test in this company.

Which means we’ve thought a little more broadly and make no apology for the fact that the Mercedes-AMG S63 Coupé you see here has two fewer passenger doors than the Panamera. Although the S-Class Coupé is shorter and lower than the equivalent saloon, its length is just half a centimetre shorter than the Porsche’s, while Mercedes-Benz has vast experience at making fourseat, two-door luxury cars, absurdly powerful or otherwise, and they’re mostly entirely satisfying.

This is one of those absurdly powerful ones. The S63’s 5.5-litre AMG V8 makes 577bhp, which it applies, via a seven-speed automatic gearbox, to the rear wheels only (a right-hand drive anomaly; in left-hand drive markets the S63 is fourwheel drive). There are air springs, whose functionality includes an active ride control system that can even tilt the body into a corner, and the asking price is £127,675.

Then there’s the BMW M6 Gran Coupé, evidence that even one of the definitive super-saloon manufacturers has had to diversify to keep pace with – or generate – market demands. Audi and BMW are the masters at this model expansion: first there was an executive saloon, then a two-door version of it, which these days then spawns an SUV, a convertible and, eventually a fourdoor ‘coupé’ like this one.

Underpinning the 6 Series Gran Coupé – it, too, is five metres long, albeit 4cm shorter than the Porsche – is the outgoing 5 Series platform, which also, in its time, sat beneath a 7 Series. We got in varying degrees of pickle over this platform: some 5 Series variants were best in class and some hardly recommendable, with curious ride and steering characteristics being chief among its problems, and the previous 7 Series never led its class.

Of everything on this architecture, then, over the years, I’ve found the M6 Coupé to be the most satisfying. Shorn of a need to ride with the accepted compliance of an executive or luxury car, it was allowed to be focused and taut, two things it pulled off rather well. Until today, I haven’t driven an M6 in four-door Gran Coupé trim, but at 1950kg, it is, encouragingly, the lightest of these three and also comes here fitted with BMW’s Competition Package, which raises the power of the twinturbo 4.4-litre V8 to 592bhp. Adding the Competition Package raises the price by £6300 to £101,965 but also stiffens the coil springs, dampers and anti-roll bars, a move that might lead you to think that the M6 will sacrifice yet more of the comfort that, presumably, it would be short of in this company anyway.

Well, you’d be half right, and we’ll come onto that. But it depends what you want your big super-saloon or sports sedan or whatever you want to call it to be, doesn’t it? And, at the risk of planting a mid-season spoiler in the box set that is this group test, that’s ultimately what it comes down to. These three are all terrific. I can’t remember the last time I wrote a group test of cars I thought were this capable, and yet so diverse in the way they perform ostensibly the same job. The way they do interiors is markedly different. The M6’s cabin is well finished, with matt black plastics and satin metals that ache with understated BMW class. Less opulent than the others it might prove, but it’s nothing like low rent. The seats are embracing and rear leg room plentiful for an adult to sit behind an adult driver. And the iDrive multimedia controller is still one of the best in the business to use.

Classy though it is, the M6 is in the company of an S-Class here. Mercedes itself is on a good run of executive and luxury car form and AMG an even better run. The S63 Coupé aims to encompass the best of both divisions, but one leisurely sink into its front seats and you know, when it comes to comfort or dynamism, which is going to be this car’s stronger suit. There are acres of soft, quilted, holed and stitched leather. It’s like a giant brogue beanbag. It’s tighter in the back, obviously – and harder to get into – than the 6 Series, but although head room is less than generous, leg room is fine to sit grown-up behind grown-up. Besides, although it’s an S-Class and each of these cars is five metres long, ultimately they’re about the driver. Who, in this instance, gets heated armrests, in case you were doubting just how luxurious it is.

I’d heard great things about the Porsche’s interior. And, no doubt, it’s bigger than the others – front and back – and leagues better than its predecessor. The haptic feedback from buttons on the shiny centre console is slick, and the large digital displays – only the central rev counter remains analogue – have a terrifically high resolution. I’d say it’s pitched closer to BMW than Mercedes in terms of luxury feel and the novelty of it makes it feel special. The operating system is mostly touchscreen controlled, something I used to be a fan of, but there are so many sub-menus now that a control dial with shortcut buttons is simpler.

What’s no novelty is the way the Panamera rides. No Porsche has ever ridden as well as this, with terrific isolation and refinement. There’s the very occasional ‘sproing’ that gives this car away as being air-sprung, and I suspect that would disappear entirely if the car were on smaller wheels than the 21s it arrived on.

The S63 looks way undernourished by comparison, riding on 19in wheels and having – shock – sidewall profiles that begin with a number as big as a four. As a result, its ride is more isolated even than the Porsche’s. Noise levels seem lower, too, and the engine – bigger, lower revving, more torque laden – has a more relaxed, seductive woofle. Both have fine transmissions. The Porsche’s dual-clutch auto comes with creep and shifts that feel almost as smooth as those of the best auto gearboxes. The Mercedes simply has one of the best auto gearboxes.

The BMW doesn’t have one of those. Its abruptness around town is a lowlight of its performance. But for all BMW’s compromises on this platform over the years, elsewhere the M6 shows it in a great light. Sure, its ride is unsettled in this company. The 20in wheels are shod with serious Michelin Pilot Super Sport rubber, and although you can swing the dampers between modes of stiffness, there’s usually an underlying fidget and jitter to the experience. Not an uncomfortable or budget feel, mind – we’re not at Ford Fiesta ST levels of unsettlement here – but if you’ve stepped out of one of the other two test cars, the M6 has an honest, noticeable patter about it.

Refinement is otherwise good, but the M6 feels like it would like you to know that if any of these car makers uses words like ‘sporty’ or ‘faszination’ in its marketing bumf, it’s the M6 that deserves it. In its lightest mode, its steering is overly remote, but whack up the weight and so, too, comes more confidence. The M6 is terrifically well balanced and generates strong grip and traction, even in rough conditions.

The Porsche takes all the numbers the BMW can summon and increases them – more grip, more traction and more low-rev acceleration, thanks to inimitable torque. It also throws in superior refinement. As well as the test track and country road miles I spend in these cars, I also take all three into London. The Porsche is more isolated and, when you get on a motorway, feels like it’s the one you’d choose to hammer from Hamburg to Berlin. But in doing all of the above, it has become a less involving, less analogue experience than the M6.

The S63 is less involving than either but, let’s not forget, it’s meant to be. And there is precisely nothing wrong with that. Hustle it and it’ll do what it can, but the Mercedes part of the Mercedes-AMG name tag holds the predominant character. To criticise it for that would be like calling a tea room too homely.

What matters is how fit each is for its intended purpose, and when it comes to very straight, nonnuanced, purely objective scoring, that nod goes to the Porsche, which does astonishing things. The M6 is more satisfying dynamically and epitomises to me what a super-saloon should be, and the S63 is comfortably more opulent and everything a luxury car should be. But if you want a winner – and you probably do – bravo, the Porsche it is. Curiously, though, it’s the one I’d choose last.

How to Fall Asleep Fast and Easy: 8 Helpful Tips