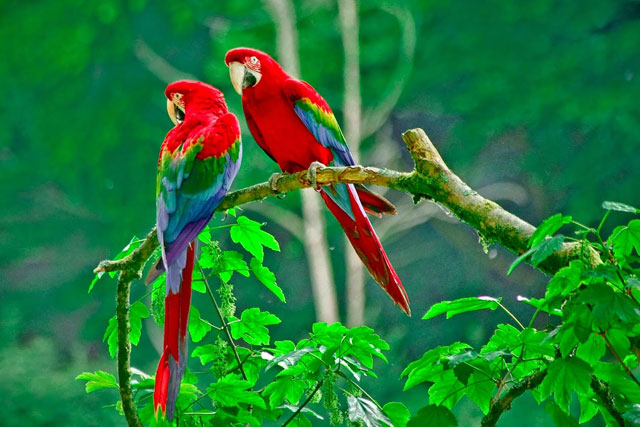 Parrots are colorful birds that are mostly found in warm and humid areas such as rainforests and islands but with time, some of the parrot species like Kea Parrot broke this trend and prefer cold areas to live in. Parrots are considered as wild birds but some parrot species are the most loved companion of humans and people like to have them as a pet.

Female parrots lay eggs so they are not mammals. There are many species of parrots and according to scientific classification there are more than 300 species exists on this earth. Macaws, cocktails, lovebirds and many more species are most interesting and loved pets of humans.

Having a pet bird is different from having pet cats or dogs. They need perfect cages and perfect care. Parrot is one of the most interesting bird that would not only be a great companion but an interesting journey of discovery to ponder upon.

Parrots have many unique characteristics.

There are many kinds of parrots but the most important of all the parrots are Cocktails, Amazons, Parrotlets, Lovebirds, Budgerigars and African Greys. The popularity of the parrots is highly dependent on the size, age, colors, vocalization and personality of the parrots. People buy the parrots according to their likes and characteristics of these parrots.

Different species live in different regions of the world according to their need. Some lives in tropical or subtropical areas of the world. Parrots that have habitat in America are called as new world parrots and parrots from Africa and Australia region are known as old world parrots.

The most fun and unique trait of parrots that had made everyone astonished and amazed is their ability to mimic the noises or to talk like humans. Parrots are the most intelligent bird among other birds and their vocal abilities make them more unique and intelligent. According to a classification, parrots can be classified as a talkative, whistler, screamer and quiet ones. The species that is considered the best mimic is amazons, myna birds, the Quakers and African Greys.

To provide basic care to the bird is important to keep them healthy. A cage is a must to protect parrots and it also gives them a sense of a home to them. It provides the basic needs such as proper lighting because parrots need 12 hours of light and 12 hours of proper darkness to sleep. A proper size analyzed cage is important for parrots so that they can move freely in the cage and can also spread their wings freely.

Cleaning of the cage is on daily basis is also important for the health of the parrot. Food and water platters of parrots should be clean on weekly basis.

Proper food should be given to the parrots to increase their growth and to make them safe from many diseases. Parrots like to have fresh fruits and vegetables so it should be given properly.

If you are interested in getting more in-depth information about parrots visit cuteparrots.com.

Who are Holistic Dentist and What is the Difference Between them and the Biological Dentist?