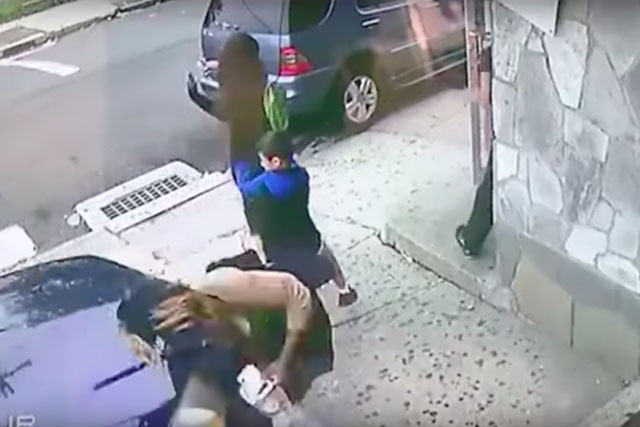 Police in Connecticut is calling a woman a hero after she lunged in front of a young boy moments before an out-of-control car plowed into them, pushing both into a wall.

As seen in surveillance footage of the crash below, the woman, Shanta Jordan, appeared to move in front of the boy moments before a speeding car slammed them into a concrete wall in Bridgeport, Connecticut, on Wednesday, according to local news station KRON. Both were seriously hurt.

“If she did not step in, the child would be in direct contact with the motor vehicle against the wall, and most likely, he would have perished,” Bridgeport Police Chief A.J. Perez told KRON. “He would have died.” The chief told CNN Jordan was a “heroine.”

Jordan and the boy were briefly pinned between the car and the wall, but the car rolled backward and the two victims fell to the pavement. The car also struck a second boy, who was able to stand up immediately after he was hit. Both of the boys are under the age of 10, the Stamford Advocate reported.

Police said Jordan pushed the boy just before the impact in order to save him, according to local news station News 12 Connecticut. Her larger body absorbed much of the force, according to officials.

The driver, 37-year-old Allen Pearson, was charged with reckless driving, driving without insurance, operating an unregistered car, and failing to obey a stop sign, according to the Stamford Advocate.

City leaders and police will honor Jordan with a Commendation in a ceremony at city hall next week, according to News 12.