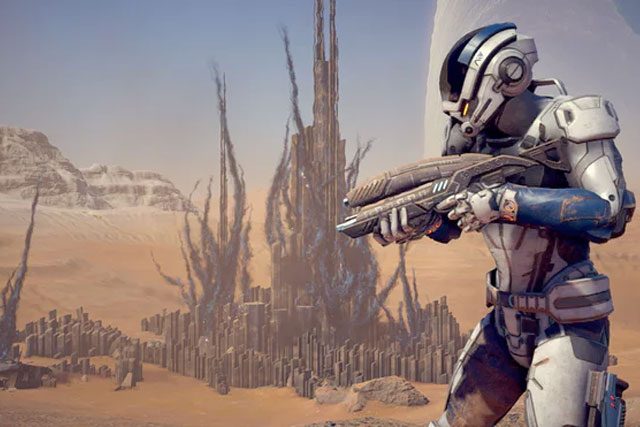 Mass Effect: Andromeda is the first new Mass Effect game in five years and the first on the current generation of consoles. Set in the same universe as the original trilogy but in a different galaxy and 600 years later, Andromeda tells a new story with new characters in a new setting. This was BioWare’s opportunity to change the formula, no doubt with substantial anxiety over how fans would react. Here are some of the key ways Andromeda has changed the Mass Effect universe, based on the first few hours of the game.

Mild spoilers for the opening two missions lie ahead.

The original trilogy was set not too long after humans discovered the alien tech that allows them to travel across the galaxy at speed. Each game took the player to different planets, but they were all still within the Milky Way.

As the name suggests, Andromeda is different. As one of the Ryder twins (default Sara/Scott), you begin the game by waking up in the Andromeda galaxy after 600 years in cryo-sleep. You and the other colonists – 20,000 from each of the four Citadel Council races (asari, salarian, turian, human) – are looking for a new home among several potential “Golden Worlds”. Naturally, everything has gone wrong. And so, rather than getting to just pick a planet and settle down, you have to fill in the role of “Pathfinder”, travelling from planet to planet looking for one that won’t kill you. It probably won’t be the one characterised by dangerous lightning and No Man’s Sky-esque floating mountains.

Of course, the threats in this new galaxy aren’t merely geographical. On the very first planet you immediately stumble across an unfamiliar alien race that someone later dubs the “Kett”. By this point you’ve already heard a few times about the “first contact” protocol, which states that you mustn’t harm any alien life unless it attacks first, but – of course – the Kett quickly reveal themselves to be targets you can shoot on sight without the need for guilt. So far they don’t seem at all interested in learning to talk to the humans. And they bleed green.

No more paragon or renegade:

When faced with an alien who will talk (in the first few hours at least, this is only the ones you brought with you from the Milky Way), your conversation options have expanded beyond paragon (good) and renegade (bad). Now you can choose answers that reflect a variety of tones: emotional, logical, casual and professional. It’s all very Myers-Briggs, and will apparently have effects on later events in the game.

Some people have reported being put off by the relatively low quality facial animations. To what extent the fact that the characters here are less convincing than the likes of Uncharted 4’s Nathan Drake impacts your enjoyment will come down to personal preferences. As long as the characters actually have faces (I’m looking at you, Batman: A Telltale Series, I’m happy. And Fryda Wolff (Sara Ryder) is doing a great job with the voice-acting so far.

"there are some gaps in that memory" Alfred told Bruce Wayne pic.twitter.com/scysRsMizJ

Without revealing too much of the plot, your chosen Ryder has a neural implant that connects her (or him) to an artificial intelligence called Sam (Simulated Adaptive Matrix). He helps you out, suggesting next actions and enhancing your abilities, but his control over Ryder’s body and mind is undeniably unsettling, especially when you learn that he has Ryder senior’s memories in his storage. What if you try to romance someone that dad wouldn’t approve of, and Sam takes it upon himself to somehow prevent the union? If this creepy AI-human bond isn’t explored further later in the game, I’ll be very surprised.

Rather than commit yourself to one class, Andromeda lets you choose skills from combat, biotics, or tech as you see fit. It’s actually kind of overwhelming compared to the previous games, but given that combat has improved enough to make it more than just something you suffer through to get to the next bit of story, you might want to spend some time deciding what’s right for you. My early favourite is the tactical cloak, a tech ability that lets Ryder turn invisible for a while and provides a damage bonus to whatever attack you use while cloaked.

One big thing that makes the combat more enjoyable, aside from the automatic cover, is the jump-jet. In the first two missions you are encouraged to use it often: to jump up to otherwise unreachable ledges, to fling yourself across chasms, and in one case to go searching for glyphs so that Sam can feed them into his astonishingly effective translator. That the planets you visit always have a few ledges just high enough for your jump-jet to reach will probably get old, but it’s better than being forced to take a long and winding path because you can’t jump at all.

The Mako was a divisive vehicle, and BioWare is brave to try again. In Andromeda you have the Nomad, a sturdy space car that comes with two modes: fast mode and a mode that allows it to drive up hills. Unless there are more interesting uses for this further into the game, probably just expect lots of planets with one or two hills that are just steep enough to force you to switch modes for a few seconds.
It’s definitely advantageous to have an alternative to walking when it comes to traversing these new planets, especially given the hazard resistance the Nomad provides, but something is missing. Maybe it’s the charming, awkward, tumbling lightness the Mako had. Or maybe it’s just the guns.

For every mode of transport (so far), there’s a mode of scanning the environment for some kind of resources.

On foot, you have a scanner (on console, press down on the D-pad) that provides information about individual objects both animate and inanimate. The more interesting uses include scanning the first Kett you kill to prompt a conversation about this unfamiliar species, and scanning those glyphs Sam sends you after. A less interesting application is whipping it out in every new location in case any of the objects around you have “research data” to offer. This data, which comes in three flavours – Milky Way (stuff you’ve brought with you), Heleus (stuff you find in Andromeda), and Remnant (mysterious technology that will presumably be explained further into the game) – is used to unlock blueprints for crafting armour, weapons, and improvements for the Nomad.

In the Nomad itself, you use your mining computer to scan for resources like aluminium and iron, which in turn are used to craft from those blueprints. You find an area determined ripe for mining, and then drive around in circles while an overlay shows graphs representing the density of resources. When you’ve hit the peak, you release a mining drone. So far, so dull.

It’s even worse at the galaxy level, where you can scan entire solar systems looking for pockets of resources. If the very idea of what amounts to clicking on things until you find the one that makes your numbers go up wasn’t tedious enough, every time you travel between planets (and other system-level locations: space stations, asteroids, etc.) you have to watch several seconds of flight animation. The view will slowly zoom in on your current location and rotate to face your destination before carrying you through asteroid fields or light shows that presumably represent faster-than-light travel. It’s pretty, and thus presumably was expensive to develop, perhaps too expensive for BioWare to consider throwing out even if playtesters did find it as boring as those writing previews have.

Scanning for resources does fit with the narrative; it feels like the kind of thing that a group of colonists new to a galaxy would have to do. But it also feels like it ought to be the responsibility of someone other than the Pathfinder.

All the extra stuff BioWare has added to this game compared to the original trilogy makes Andromeda feel like it fills a similar role to the original Mass Effect. If this too is the first in a trilogy, then we can expect its sequels to improve on what players like and adapt or remove those features – like the scanning – that go down poorly. At this point it’s too early to tell whether what’s core to a Mass Effect experience – the story, the characters and maybe the locations – will live up to expectations. But there’s a careful balance to be struck: if players are too put off by some of these less fundamental features, they may never get far enough into the game to find out.

Gwyneth Paltrow is venturing far from her Goop blog

5 Myths and Misconceptions About Orthodontic Treatment