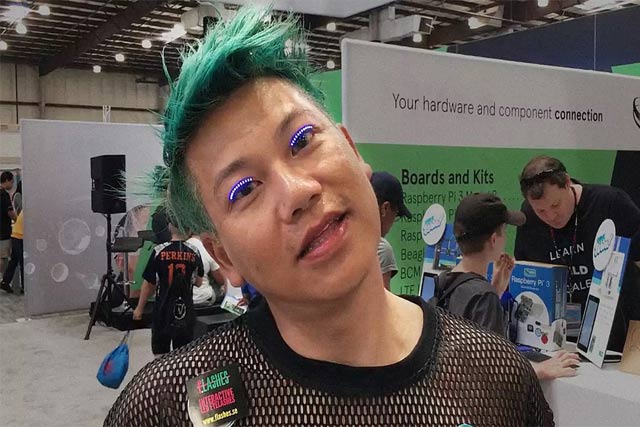 We see your glitter tears and barbed wire eyebrows, but if you really want to take beauty into the future, you’ll at least consider these LED eyelashes.

Dubbed F.Lashes, the illuminated eyelashes appear to change display animations depending on how you tilt your head or move your body.

Co-creator and Arduino designer Tien Pham showed the F.Lashes off on Friday. According to Pham, the lights on the LED eyelashes are powered by a tiny 3.3-volt watch battery and last about four hours. He also claims that they hold up well when exposed to sweat and don’t emit any noticeable heat.

Hidden away from the front-facing tech-meets-beauty part is an Arduino controller running the eyelash light show that attaches to the back of your head using hair clips.

” The [F.Lashes] light is NOT blinding,” says Pham on his Facebook page. “In fact, I often can’t tell I have them turned on. I have to cup my hand over my eye to see the light. You might see a bit of light when you’re in a dark room, but it’s not much. ”

The wearable tech was shown off at the Maker Faire 2017 Editor’s Choice and is scheduled to be made available (price to be announced) to the public sometime in July via a Kickstarter campaign.