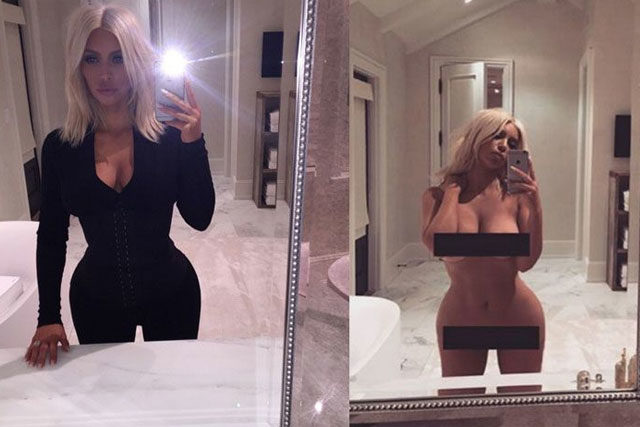 Every now and then, Kim Kardashian West posts a selfie that comes close to breaking the Internet. Last year, it was her infamous black censor bar moment. And it was the caption that sparked a thousand memes: “When you’re like I have nothing to wear LOL.”

The 36-year-old star joined the ladies on The View Tuesday, where she braved the hot seat and was very candid about her personal life, especially when asked about her famous nude photo. And she took the time to explain the real reason behind it.

“I was actually pregnant in that photo,” she revealed. “I just found out I was pregnant and so I had to dye my hair back. I thought, ‘You know what this is my one last shot of a good photo before my body is done,’ so I took a pic.”

At the time Kim said that she was, “truly was baffled when people still cared. They have seen me naked 500 times,” but the star maintains that she is unapologetic when it comes to showing off her form. While on The View, we also spilled on her new makeup line, KKW Beauty, launching Wednesday, June 21 with a collection of Kontour Kits, explaining that she’s super excited to be done with licensing deals as the owner of her own company.

“I’m so excited about it,” she shared. “I’ve worked so hard in the factories getting the formulas and the packaging. I’m the boss now.”

And in case you’re wondering where that leaves momager, Kris Jenner, Kim explains, “Don’t worry she still gets her 10 percent.”

25 Ways To Say “I Love You” For Valentine’s Day

Top 10 Most Beautiful Women in the World