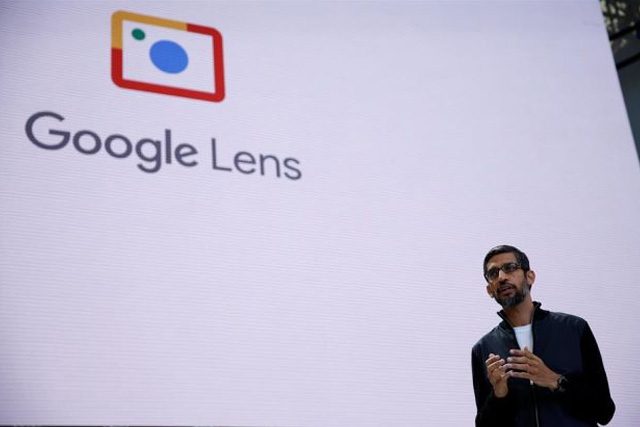 LOS ANGELES: First, computers were better at playing chess and Go than humans. Now, they’re beating us at something as fundamental as looking at things.

Case in point: Google CEO Sundar Pichai revealed at the company’s Google I/O developer conference in Mountain View this week that his company’s computers have surpassed humans at recognising objects in images.

That’s why users of Google’s mobile software will soon be able to point their phone camera at a flower, and instantly get Google’s assistant to look up the name of the plant. Point it at a restaurant, and get reviews of it. Or – and this got the most cheers out of Pichai’s geeky audience at Google I/O – point it at the password sticker on the back of a router, and have their phone use that data to log into the WiFi network.

“We are clearly at an inflection point with vision,” Pichai said.

Google’s CEO talked about this inflection point as part of a bigger transition for his company, and the world of technology in general. Google began its life a web search engine, focused on making computers and the internet easier to use. Then came mobile, and Google had to adapt. “Mobile made us reimagine every product we were working on,” said Pichai.

Now, a new generation of devices and services – including voice-activated speakers like Amazon Alexa and Google Home, but also phone cameras and virtual and augmented reality headsets – are redefining everything once more. “Computing is evolving again,” he said. “We now have voice and vision as two new important modalities for computing.”

Google announced its new image-recognition efforts Wednesday under a new project name, Google Lens. Pichai said that Lens-powered technology will first come to Google Assistant and Google Photos in the coming months, and find its way to additional Google products in the future.

Accident or not, the Lens name clearly sets Google’s image-recognition efforts apart from Snapchat’s and Facebook’s. Both companies are also investing massively into artificial intelligence and image recognition – but the way these efforts are reaching consumers couldn’t be different.

Snapchat’s lenses, and Facebook’s filters, allow consumers to add rainbow-puking unicorns and animated birthday cakes to their photos and videos. Admittedly silly stuff, but Facebook CEO Mark Zuckerberg made a convincing case during his company’s recent f8 developer conference arguing that there is more to it.

Facebook in particular has been using advanced image-recognition technologies powered by artificial intelligence to recognise and isolate objects in those pictures. And while consumers post, share and remix billions of silly photos, Facebook’s algorithms are busy crunching in the background, using them as training data to get better at image recognition and augmented reality.

Zuckerberg said that his audience was looking to use phone cameras and visual effects to make augmented reality mainstream. “We are going to make the camera the first augmented-reality platform,” Zuckerberg said.

Google has no rainbow-puking unicorns. It clearly is working on the same problems, and also loves to collect data and train its algorithms, but does so with a Google-ish twist. Instead of being fun, it wants to be useful – even if that means that pundits call it boring.

The company is also busy chipping away on other parts of the problem, including voice recognition – an area that Facebook has thus far eschewed. And there are clear areas of overlap between advancements at Facebook, Google and other companies. The most obvious example for this is virtual reality, where Google will soon compete even more aggressively with Facebook’s Oculus by launching a standalone VR headset.

But Google is also playing in a league of its own, something that became evident when Pichai announced that the company is now building servers and datacentres focused on artificial intelligence that are being made available to other companies as part of its Google Cloud platform. And if that wasn’t enough, Google is even working with phone makers to bring chips optimised for artificial intelligence to future Android phones.

These kinds of chips will make it possible for future phones to get even better at voice and object recognition, and enable all kinds of far-out augmented and mixed-reality applications. You know, things that make rainbow-puking unicorns seem outright boring. — Reuters

Best Tips To Maintain The Air Conditioning System of Your Car