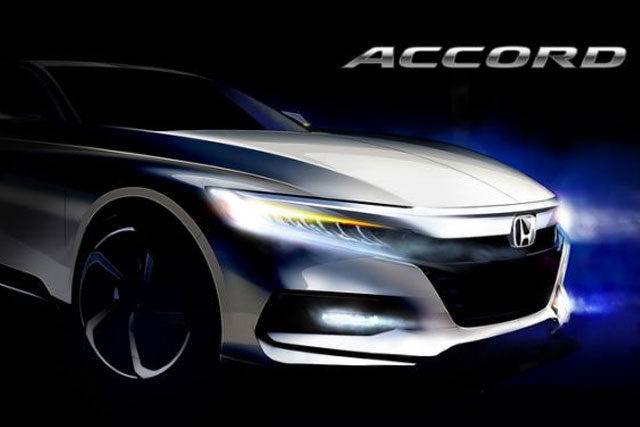 It’s probably not being too unfair to say Honda is widely seen as something of a conservative auto brand, but it’s also one that’s definitely been looking to expand its appeal beyond its traditional customer base recently. That plan to connect with a broader, more youthful audience looks as though it might just be being ramped up a notch now. That’s because the Japanese automaker has revealed a simply stunning concept sketch of its all-new tenth-generation Accord, which is set to be properly unveiled in all its full glory in Detroit on July 14.

This all-new tenth-generation 2018 Accord is being billed by Honda as, “the most fun-to-drive, premium and dramatically styled Accord ever.” And although we’ll have to take the manufacturer’s word about the fun-to-drive and premium parts of that statement for the moment, the illustration it’s just released is understating the “dramatically styled” bit if the car looks like that when it’s finally unveiled.

The sketch looks more like something dreamed up by an enthusiasts’ publication or website, or a one-off model we might see on a stand at the SEMA custom show in Las Vegas in November.

Although the Accord has been dropped by Honda completely in some markets such as the UK due to disappointing sales results, it’s still an incredibly important model to the brand and its ongoing success. In fact, in Honda’s biggest market, the US, the Accord is currently the best-selling retail midsize sedan, and has been now for some four straight years. To the end of May this year, based on retail sales to individual buyers, the current Accord is still America’s top-selling midsize sedan and the second best-selling passenger car of any type. And being second best overall is no problem for Honda as the Accord is only being beaten into second place by the latest Civic. To give an idea of how America sees the Accord, this car is also an unprecedented 31-time winner of Car and Driver magazine’s coveted 10Best award.

We’ve already been told there will be three powerful and fuel-efficient powertrains, including a pair of new direct-injected and turbocharged engines with a range of ten-speed automatic, CVT or a six-speed manual transmissions depending upon engine. If the new model closely resembles this image, it’s easy to see buyers demanding that it goes on sale again in those markets where the Accord has been discontinued.

What Can I do My Dog For Pain?

How to Preserve Client Data When Running a Cruise Ship Recruitment...