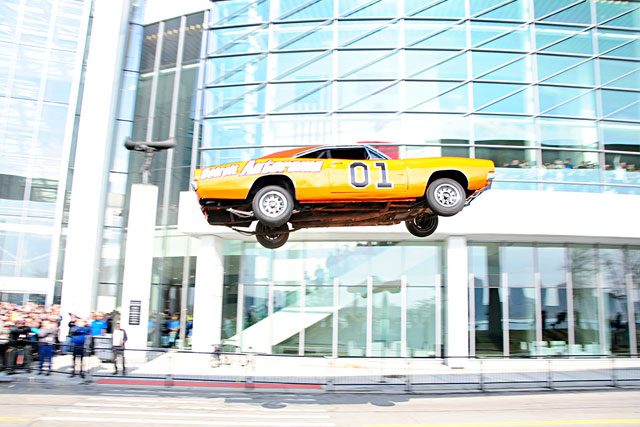 Ouch. That was our first reaction after we saw the video up above, in which stunt driver Raymond Kohn goes full-on Bo and Luke Duke in a specially prepared Dodge Charger right in the middle of Downtown Detroit. The jump looks good – and, courtesy of the whistling-Dixie horn of the Charger, sounds good, too – until you see the landing. Like we said, ouch.

The ramp stood just five feet tall, but since the bright orange ’69 Charger was traveling around 55 miles per hour when it launched, the car soared 25 feet in the air over a distance of 134 feet. That’s pretty impressive. Apparently, the car was modified to take the brunt of the landing forces at impact to help keep Kohn safe (relatively speaking, of course).

The stunt was a promotion for the 65th annual Autorama Show, which is taking place this weekend at the Cobo Center in Detroit. Scroll down to watch a video interview with Kohn that was shot right after the stunt, and stick around till the end to see the automotive carnage close up.

What Is Fiverr? How Fiverr Works

3 Things To Consider When Designing Your Living Room