First Signs of Pregnancy – Early Symptoms of Your First Trimester 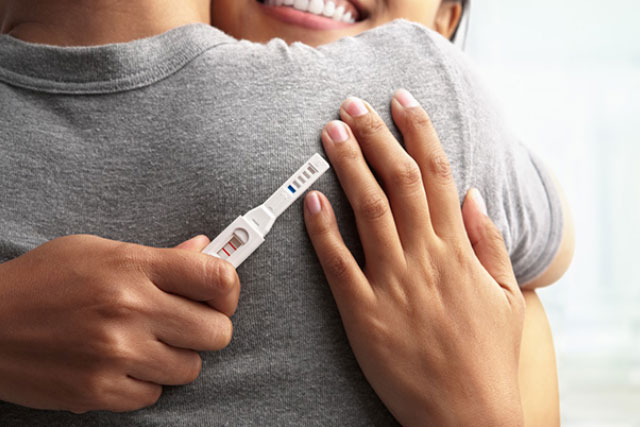 Before my first pregnancy, I enjoyed a glass of wine with dinner and an occasional big, juicy chili dog. But even in those very first days after I conceived, the wine tasted flat and the hot dog repulsed me. Fast-forward a few weeks. With a positive pregnancy test in hand, I realized that my body knew I was pregnant before my mind did. Of course, the earliest symptoms of pregnancy wax and wane and are different for each woman; in fact, some women may experience (or notice) none of them. But several can crop up well before you even miss a period. If you’re the impatient type, here are the most common early-pregnancy clues to look for.

Your breasts may be extra tender as early as a week or two after conception. “You’re making so much estrogen and progesterone in early pregnancy that the glands in the breasts start growing,” explains Jasbir Singh, M.D., an OB-GYN at Baylor Medical Center at Waxahachie in Texas. This hormone surge causes breasts to retain more fluids and feel heavy, sore or more sensitive than normal PMS tenderness.

What to do Buy a very supportive bra.

When the fertilized egg implants into the plush lining of the uterus about six to 12 days after conception, spotting—light vaginal bleeding—may occur. This is harmless, but if you suspect you’re pregnant, let your doctor know, just in case it’s something else. (If the bleeding occurs as late as 12 days after you conceive, you may think it’s your period.)

“In the first trimester, bleeding should be evaluated for three things in particular—miscarriage, an ectopic pregnancy or certain types of infections,” Singh says. “Implantation bleeding is sort of a diagnosis of exclusion. That means we rule out the bad things before we can determine this is what it is.”

What to do Call your doctor if you notice any bleeding.

During the first few weeks, your body is working 24/7 behind the scenes to support the pregnancy, and fatigue is a normal response. The extra progesterone produced after conception causes your basal body temperature to rise, which in turn contributes to a lack of energy, explains Karen Perkins, M.D., an OB-GYN with A Woman’s Choice at Mercy Medical Center in Baltimore. Your heart also pumps faster, as it has to deliver extra oxygen to the uterus; this, too, can make you feel tuckered out.

What to do “Take prenatal vitamins early on, eat a healthful diet, drink plenty of fluids to keep your blood pressure high enough, and rest when you can,” Singh says.

You might think this comes later, when the baby presses on your bladder, but frequent peeing sometimes starts early. Not only can the swelling uterus put pressure on your bladder, but the extra blood flow to the kidneys (which begins right away) also causes them to produce more urine.

What to do Nothing, unless the frequent urination is accompanied by burning, urgency or other signs of infection. (If so, notify your doctor.) Do not cut back on your fluid intake.

This can start as early as two weeks after conception. “Progesterone causes a lot of things to slow down,” Singh says. That includes your digestive processes, sometimes resulting in constipation or indigestion. Since your stomach doesn’t empty as quickly as it normally does, it thinks there’s too much going on in there and wants to purge in some way—either into the gut or out through the mouth. Nausea also is related to human chorionic gonadotropin (HCG), a hormone that can be detected in the mother’s blood or urine even before a missed period. The higher the HCG level (as with twins), the sicker you may feel.

“Another theory is that nausea and food aversions are a protective effect the body has toward the fetus,” Perkins says. If things like free radicals or nitrates in some foods could hurt a growing baby, you may naturally develop a distaste to steer clear of them.

What to do Many women find ginger and lemons soothing. Ask your doctor about special vitamin B6 supplements that may alleviate nausea. Acupressure wristbands also can help. If you’re vomiting frequently or can’t hold down any liquids, see your OB for possible IV hydration and medication.

Find yourself weeping over a “Desperate Housewives” episode or raging because the DSL guy can’t come until Tuesday? “Because of the flux in hormones, you can go from being tearful to angry instantly,” Perkins says. Generally, mood swings in early pregnancy don’t require any medical attention.

What to do Wait it out. “Be aware of your mood shifts and make sure others around you also are aware of the reason and are supportive,” Perkins suggests.

Many women mistake these common early signs of pregnancy for PMS symptoms, but actually they’re caused by hormonal changes and the growth of the uterus.

What to do Nothing, unless the pain is severe or symptoms are accompanied by bleeding.

On soaps, the woman always faints before she finds out she’s pregnant. Progesterone can contribute to lightheadedness by making your body “run hotter” and causing blood vessels to dilate, which lowers blood pressure. In addition, it takes a little longer than normal for blood that’s been diverted to the uterus to make its way back to your brain when you stand up. Dizziness also can stem from low blood sugar. “If you’re not eating properly, you can feel lightheaded,” Perkins says.

What to do Move slowly, and don’t leap out of bed or off the couch abruptly. Keep blood sugar stable by eating every three to four hours, and drink plenty of water to keep your blood pressure steady. Avoid overheating, and if you do feel faint, sit down with your head between your knees.

Some women have more headaches early in pregnancy. “They’re related to the increased progesterone levels; plus, headaches can result if you don’t drink enough fluids or if you’re anemic,” Perkins says.

What to do Drink plenty of fluids, and get your blood work done to check for anemia. If headaches persist, ask your doctor about taking Tylenol.