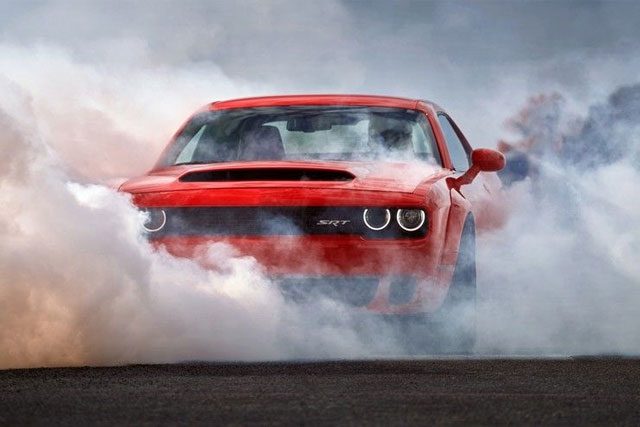 Dodge Demon Should Be Banned

Trade publication Automotive News has called for the new Dodge Challenger SRT Demon to be banned in a scathing editorial regarding the muscle car titled “Keep the Dodge Demon off our roads.”

The outlet called the 808 hp Demon “inherently dangerous to the common safety of motorists,” even while admitting there are other “more powerful, and even faster vehicles available from other automakers that are rightly street legal.”

The Demon was designed to be the quickest car in the world, and it has several drag racing-style features never before offered on a factory production car, including a transmission brake and a standard set of drag radials, which have the minimum amount of tread to be approved for street use by the DOT.

The car only ships with a driver’s seat and can run on 100 octane race gas with a factory upgrade that comes with a warranty and bumps its power up to 840 hp. The Demon’s quarter-mile performance of 9.65 seconds at 140 mph means that it requires a roll cage to be used on a drag strip if its owner actually plans to drive it that quickly.

The editorial says that the Demon is “the result of a sequence of misguided corporate choices that places bragging rights ahead of public safety,” and that it “spits” on the industry’s goal of improving safety while “knowingly placing motorists in danger.” It goes on to quote Ralph Nader and proclaim the Demon “unsafe at any speed.”

Dodge has not commented on the editorial.

The accusations are made despite the fact that no one on the staff of Automotive News has yet driven the car, and the piece doesn’t mention Dodge’s assertion that the Demon isn’t just a drag racer. Its braking and roadholding capabilities are far superior to most cars on the road today, according to Dodge brand boss Tim Kuniskis, who says that it has the ability to pull a supercar-like 1.00 g on the skidpad and come to a stop from 60 mph in less than 100 feet, a feat that very few cars in the world can achieve.

(Update: Automotive News’ enthusiast-focused sister publication, Autoweek, has published its own editorial saying that it expects the Demon to be “plenty safe when used responsibly.”)

The Demon is based on the 707 hp Dodge Challenger SRT Hellcat, which was expected to be a low volume, limited edition niche vehicle, but turned out to be a surprise hit for the brand. Dodge has been selling more than twice as many as it expected to when it put it on sale in 2015, and has since expanded the availability of the Hellcat engine to the Charger sedan and upcoming Jeep Grand Cherokee Trackhawk.

The Demon will only be offered for the 2018 model year. Just 3,000 are planned to be built for the U.S. market, with an additional 300 slated for Canada.