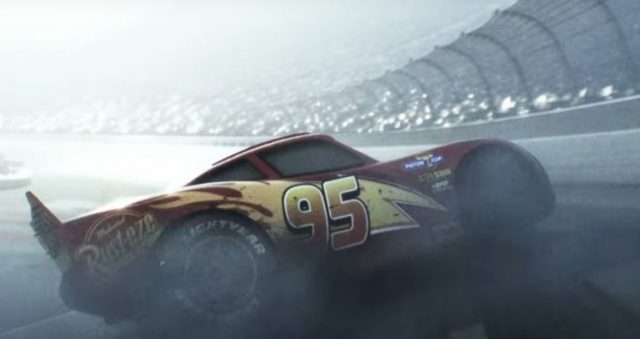 With all the new movie trailers coming out around this time, it’s easy to overlook a few.  No matter how large the franchise, how beloved the character or how incensed the content, something is always bound to slip through the cracks, especially when it’s only fifty seconds long.

But this Monday, that’s exactly what happened with Pixar’s Cars 3.  A teaser trailer hit the internet that showed Lightning McQueen – the lead of the Cars franchise – in a catastrophic car accident.  During a NASCAR-like race, we see his tire catch on a turn, sending him spiraling out of control: tumbling end-over-end in front of a pack of barreling cars and his own sparking wreckage.  Then the screen cuts to black and a title card promises that “from this moment everything will change.” Personally, I never saw the appeal of the franchise.  The first movie was a well-enough story promoting small town values in the face of major league success: about slowing down and not taking the people around you for granted, playing fair and doing the right thing.  It featured a talented voice cast and high-end animation that was, when all was said and done, just fine.  I never actually saw the sequel because of how that was critically lambasted it was (not to mention my own lukewarm feelings for the first).

But the kids seemed to love it and the series kept raking in money and it really wasn’t doing anybody any harm.  If nothing else, the series’ heart was in the right place, and that was worth something.  After looking ahead to next years’ crop of movies, and seeing Cars 3 with a prime Summer release date, I assumed that it was going to be the rare Pixar movie that I’d skip and not think twice about. That was before this trailer: a trailer that I have to imagine reduced most kids who saw it to tears.  It’s dark in a way that Pixar – and most certainly Disney – movies never get.  Toy Story 2 had Woody coming to terms with his own mortality, but at least he didn’t die.

Now, it’s possible – even probable – that McQueen doesn’t die.  Especially as an opening to the story, it doesn’t seem like the kind of thing Disney would allow Pixar to get away with.  Never mind sequels and merchandizing, Disney isn’t in the business of maligning their core audience by an unprecedentedly dark twist on a beloved property.


What I think is more likely is a kind of comeback story: basically Lightning McQueen as Vinny Pazienza (the real-life boxer whose comeback from a catastrophic spinal injury inspired the movie Bleed for This).  Lightning is down and out after his accident, struggling to make sense of a world in which he can no longer race in the fast lane.  Maybe he has to defy the odds and crawl back to the top for one last championship race?  Maybe he’s forced to take a supporting role in a young up-and-comers story like Rocky did in Creed.

Either way, Pixar has my attention.  For the first time in a decade I’m actually interested in a Cars movie.  It’s a bold turn for Pixar, but I’m willing to follow them down it and see where the story surfaces.

LED eyelashes are the future of making your eyes literally light...

Everything you Need to Know About Abscessed Tooth