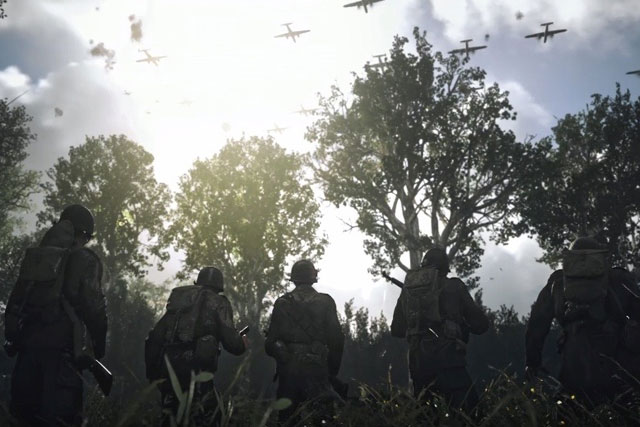 Update: The official Call of Duty: WWII reveal trailer is here! We’ve embedded it below — just scroll down.

We’ve also learned the Call of Duty: WWII release date. The gritty game goes on sale on November 3 for PS4, Xbox One and PC.

The game makers at Activision are stressing the new Call of Duty returns the game to its roots, and they’ve done extensive historical research to make the action and atmosphere as authentic as possible. More information around the game’s multiplayer and its main campaign has been revealed by Sledgehammer co-founder Michael Condrey in a recent interview with GamesRadar. Read on to find out more about the interesting new gameplay changes!

It’s official: the Call of Duty franchise is returning to WWII in 2017. We’ve now seen the official reveal trailer, courtesy of a worldwide reveal on April 26.

The Call of Duty franchise faced its toughest year yet in 2016. While the futuristic Infinite Warfare sold pretty well, it was surpassed by other shooters in nearly every way. Titanfall 2’s slick campaign put it to shame, while Battlefield 1’s 64-player battles in open terrain made the familiar Call of Duty formula feel stale.

In the words of Activision, Call of Duty: Infinite Warfare “underperformed expectations”, and fans have been calling for a shake-up of the series for this year’s release. Thankfully, there are early signs that their voices have been heard. Here’s everything we know about this year’s Call of Duty game so far, including a tonne of intriguing rumors.

Cut to the chase:

The official trailer for Call of Duty WW2 has been revealed, giving us our first look at the game. You can see it for yourself below!

What we know so far:

The game has been confirmed to have a worldwide release of November 3, though customers who pre-order the game will get access to a private beta. It’s not clear whether there will be different beta access for different platforms just yet, but we’ll update as soon as we know more.

So, Call of Duty is taking players back to WW2 in a “return to its roots.” All of the footage in the game’s trailer was heavily focused on iconic WW2 imagery with plenty of plane and tank-warfare, beach landings, brutal combat and a distinctly Band of Brothers feel.

It’s been revealed that in the main campaign players will take control of a 19 year old soldier from Texas called Red Daniels who’s fighting on the front lines along with his squadmates in the 1st Infantry division. Though Daniels will be the “primary protagonist”, players will also play as another soldier and Daniels’ best friend called Zussman.

The story will largely follow their journey with their squadmates across a range of well-known historical locations from the war.

Michael Condrey noted in an interview with GamesRadar, however, that players  would see a diverse and more “global” extended cast that acknowledges the Allies were more than the UK and the US and the Axis force included more than German Nazis. Players can expect to see, he promises, “powerful performances on both sides of the war” from both male and female characters.

In light of this, Condrey confirmed one other playable character from the French Resistance called Rousseau. Though Rousseau will be playable, it’s unlikely the game will focus on her for very long, as Condrey also added that in order to keep the story meaningful and keep players attached to the main characters the game would primarily have players “stay with the squad […] with Daniels.”

It hasn’t revealed if there will be any other small-part playable characters, but Condrey did say that players wouldn’t play as an Axis soldier during the main campaign. Call of Duty WW2 is trying very hard to move away from the idea of the player being a single super solider that can take down the entire Axis force on their own and as a result some big gameplay changes are being implemented.

These changes will focus on making the player interact more with their AI squard. For example, if you find yourself low on ammo at some point, your squard will be able to share ammo with you. This, according to Condrey, is “one of several mechanics” where players must take advantage of different and highly varied skills offered by their wider squad in order to survive.

Another example of this is that rather than ducking for cover in order to regenerate health, players must seek out the medic in their squad in order to receive health packs.

Apparently, it will be possible for the player to lose members of their squad as they play through the game, which will also have an impact on the kind of help they’ll be able to receive: “You can be separated from guys with key abilities that would change how you play – if you’re not with the ammo guy then you have less ability to replenish your ammo.”

There will also be scripted deaths, though it’s next to impossible they will result in the loss of any character with a key ability required to complete the campaign.

Of course, there will be multiplayer and as a result of the jump back in time it will be slightly different. No more boost jumps and high-tech gimmicks – now it’s back to a more historically accurate arsenal. Not only has the historical setting had an impact on the game’s weapons, it’s also going to have an effect on the multiplayer maps and how players interact with them.

This time multiplayer maps will feature real and iconic locations from the war and the different weapons and technology available to players will mean that they’ll have to adapt their strategy from what they’ve grown used to in other Call of Duty titles.

New multiplayer mode with a story:

As well as the traditional online multiplayer, Call of Duty WW2 will introduce a new multiplayer mode with a story called War.

This mode will take the form of “a series of objective-driven conflicts” which will focus on Axis versus Ally team-based gameplay.

It looks like there will be a zombie mode in this title and it’ll be used to introduce co-operative gameplay where players will team up with their friends in order to take on hoards of Nazi zombie soldiers. Will Call of Duty 2017 come to the Nintendo Switch?

It’s too early to say. Activision have overlooked Nintendo consoles since Call of Duty: Ghosts, which was released on the Wii U. Nintendo’s consoles haven’t had the processing power to cope with the series since, and the second-screen mechanic of the Wii U could have also proved problematic.

The Nintendo Switch has closed the gap on the other consoles and proved popular with gamers. It’s therefore plausible that Activision may want to harness that enthusiasm – and the increased power – for its 2017 title. We’ll have to wait and see.

Away from the rumors, we’ve got a couple of requests of our own for the new game.

The series has featured micro transactions since Black Ops 2, but Infinite Warfare took a dangerous step towards a ‘pay to win’ model. It was the first game in the series to feature multiple weapon variants – essentially tiers – with ‘Epic’ being the highest.

You can get those variants by grinding, but it will take you hundreds of hours to build the set you’re after. Or, you can pay for COD points to spend on supply drops for rare items. You’re not guaranteed to get what you want, but spending money gives you a much better chance of getting the deadliest weapons in the game.

It’s an unfair system, and one we hope Activision ditches this year. Let’s level the playing field, rewarding players for playing the game rather than reaching into their wallets, and keep micro transactions for cosmetic items, like weapon skins.