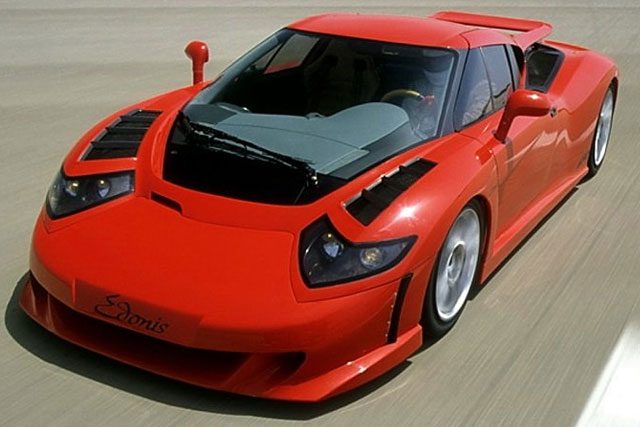 When Bugatti went belly up in the mid 1990s, a group of former employees founded B Engineering. At the time, Bugatti was building the EB 110, a supercar whose performance and power ratings would shame most cars on the road today. Just 139 EB 110s were built between 1991 and 1995, but now the car has made a return. Sort of. Casil Motors has announced a 15-model run of the SP-110 Edonis Fenice, a EB 110-based supercar with sleepy-eyed styling and an updated powertrain.

The history of the car is a bit convoluted. In the late 1980s, Bugatti was purchased by Romano Artioli. By 1991, the company was back to producing cars with the EB 110. It was a monster that was about as far ahead of its contemporaries as the Bugatti Chiron is today. The EB 110 packed a 550 horsepower quad-turbo 3.5-liter V12. It sent power to all four wheels through a six-speed manual transmission and hit 60 mph in just 3.2 seconds on the way to a top speed of 216 mph. Few cars short of the McLaren F1 could touch it.

The car wasn’t enough to prevent Bugatti from filing for bankruptcy by 1995. Volkswagen purchased it in 1998. Artioli and a group of former engineers eventually founded B Engineering. They purchased the remaining EB 110 components and revealed the EB 110-based Edonis on Jan. 1, 2000. It ditched the all-wheel drive and increased the power, but further details on changes are vague. The car never made it to production. Recently, Las Vegas-based Casil Motors stepped in to finish what B Engineering started. The car you see here is called the SP-110 Edonis Fenice.

Underneath the aluminum bodywork, you’ll find the carbon-fiber monocoque from an EB 110. The engine is a 3.8-liter version of the EB 110’s V12. It has been cranked to 720 horsepower, and the quad-turbo setup was ditched for two large-displacement turbos. Casil Motors says the car can hit 60 mph in 3.4 seconds (slower possibly because of the rear-drive setup), 100 mph in 8.2 seconds and has a top speed of more than 220 mph. It still uses a six-speed manual transmission.

Casil Motors is offering a range of options, from a stripped-down track version to a kitted-out luxury model. The optional Rinascita Aero Package fixes some of the car’s questionable styling choices.

Only 15 will be built. Pricing hasn’t been announced, but Casil Motors is requiring a $2,500 deposit. Don’t expect this to be cheap. A clean EB 110 GT is going up for auction in March for nearly $1 million. While this isn’t an original Bugatti, it does have genuine Bugatti credentials.

Why is A Family Dinner Important For A Healthy Mouth?