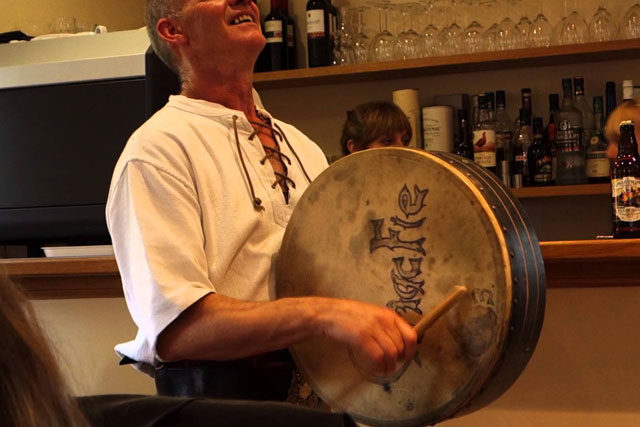 The history of Irish music is filled up with high-quality music instruments, some of which might have been imported into the country by travelers across the world. The musicians in the region even altered some versions of the musical instruments to suit their own custom playing styles. The Irish Bodhran is a typical Irish percussion instrument that has been entertaining the Irish people for generations. Its presence is found in ancient Irish music history as well. The frame drum found its much-boosted popularity in the 60’s again where it was reinvented in many newer slightly versions and a lot of new Bodhran beaters were introduced as well. Here are the top 4 features that helped the Bodhran earn the title of ‘heartbeat of Irish music’:

This typical Irish Drum is particularly compact and lightweight when compared with other regional versions of the drum. It typically comes in at about a diameter between 12 to 18 inches, however, this can be changed slightly depending on the requirement as well. The frame of the modern Bodhran is made from very lightweight yet strong materials. The compact and lightweight profile aids it to be played while being carried around easily nearly everywhere ranging from public parks to private small gatherings.

Like most drums, the Bodhran is also tuned able, however, this feature is highly boosted with the Bodhran. It is highly tuned able, more so than most other versions of the drum. The membrane on the top side held between the frames can be easily tightened or loosened to change the punch in the music produced. On the opposite side of the membrane, between the frames, some differently shaped wooden strips can also be added with the Bodhran to further alter the music output depending on the requirement. This will require a lot of mastery before alterations can be done meaningfully, however, experts do it successfully and are able to produce different levels of music by doing these.

The Irish Bodhran is a percussion musical instrument that has been historically utilized in Traditional Irish Music. But with numerous tunings done to the music output and the various customizations in design over the years have enabled it to be used in numerous other forms of music as well, some of which are very well known across the world. The punchy Bodhran beats have and are contributing in:

The popularity of the Bodhran has increased manifolds after the 1960’s boost given to it by some very famous and expert players that used it in liver performances and also while recording great Irish music.

Being pretty much the heart and soul of Irish music, the Bodhran has been available to the Irish readily over the past few centuries. However, in the more music oriented modern world, all the famous musical instruments have been made available so much easier and cheaper than what they used to be. It is fairly easy for any novice or expert alike to find a Bodhran for Sale at numerous music stores across Ireland and also around the world. A particular boost is also given by numerous online sellers of musical instruments.

Various Irish music stores have added online selling to their repertoire and have made it particularly easy for music lovers to Buy Bodhran Online. Although it is highly recommended that the quality of these online sellers is verified first by reading consumer reviews and asking people who have bought from them before. Not all online sellers are authentic and some do sell instruments just to make money however they can and not for the love of music.