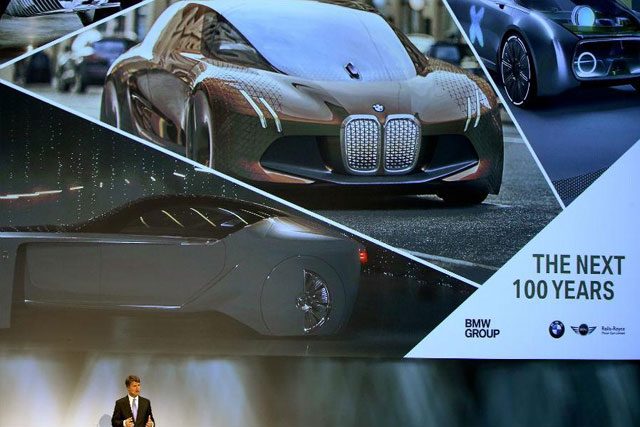 BMW Aims To Be Electrification

MUNICH — BMW will focus on leadership in electric drivetrains and connectivity rather than increasing vehicle sales, CEO Harald Krueger said.

While the automaker will continue to boost global sales, it has no fixed volume targets for 2020 or 2025, Krueger said.

Last year, BMW built a record 2.37 million BMW, Mini and Rolls-Royce cars and light trucks. Its sales of electrified vehicles, including plug-in hybrids, were 62,000, with sales of 25,500 for its full-electric i3. BMW aims to sell 100,000 electrified vehicles this year.

Press reports suggest BMW plans to reach annual global sales of 3 million by 2020, which would imply an average 6 percent annual growth based on 2016 volume.

Krueger said success will depend on being a technology leader in growing segments such as electrification and connectivity rather than sales volume, although BMW is adding more production capacity throughout its global network.

BMW needs to be the most attractive employer “because you need the best people to lead in technology,” Krueger told reporters at the company’s headquarters here Thursday.

Battery powered cars are not the only solutions to designing and engineering zero or low-emissions vehicles in future, he said. Fuel cell vehicles also will be crucial.

“With Toyota, we are working on a new generation of fuel cell vehicles. Last year, we put on the road a small test fleet based on the 5-series Gran Turismo. In 2021 we plan a small series of the next step in fuel cell technology,” he said.

Demand for fuel-cell vehicles is not advancing particularly fast because they require even more infrastructure, notably refueling stations, than EVs, but they will eventually, so BMW needs to be ready, Krueger said. A partnership with Toyota is helping BMW to advance fuel-cell technology and to share costs, but it is impossible to predict how sales of fuel cell cars will play out by 2030, he said.

BMW also needs partnerships to develop light vehicles with autonomous driving features so it is cooperating with suppliers, Krueger said.

“We are not the best in making radars and vision controls, so we work with Mobileye,” Krueger said. “We do not make chips, so we cooperate with Intel. We have just taken on board Delphi to cooperate on software and system knowledge.”

However, suppliers will never offer a comprehensive autonomous driving solution because automakers will retain computing power and software as a core competence. For a self-driving vehicle to have BMW or Mini handling characteristics, or for a Rolls-Royce to feel like being on a “flying carpet,” you need an automaker’s expertise, Kruger said.

“We are in the premium business. We sell design and emotion, not just a way of getting from point A to B,” he added.

BMW will always offer a steering wheel, leaving the driver to decide when to grab control of the wheel and pedals. “You will never see a robo-taxi from BMW,” Krueger said.

BMW said on May 2 that it will start production of its iNext full-electric car with self-driving features in 2021 at its plant in Dingolfing, Germany. The iNext will be capable of Level 4 autonomous driving, classified by the Society of Automotive Engineers as “high automation” but offering the chance for a human driver to intervene. It is one step below Level 5 “full automation” in which no steering wheel is necessary because the vehicle can carry out all the tasks of a human driver.

BMW this year will test 40 cars with Level 3 or “conditional automation.” The cars now require so much computing power that the trunk is full of computers. “This is not what a customer wants,” Krueger said.

Krueger said he hopes the United Kingdom and the European Union can reach a pragmatic compromise over trading conditions following Britain’s withdrawal from the bloc.

“On the manufacturing side we are flexible. We build many Minis in the Netherlands but the U.K. is an important market for BMW and is Mini’s biggest global market,” he said.

Krueger reiterated that E.U. targets to drastically reduce CO2 emissions by 2020-21 cannot be achieved without diesel engines, which are 15 percent to 20 percent more efficient than gasoline engines in terms of CO2. “You need to invest in clean diesels and Euro 6 engines are clean diesels,” he said.

BMW forecasts that up to 25 percent of its vehicle sales may be electrified vehicles by 2025, in line with most predictions for industry volumes. Even if BMW reaches that figure, 75 percent of its sales will be cars with an internal combustion engine with a percentage of diesels in the mix, Krueger said.

BMW’s electrified vehicle sales reached 25,000 in the first quarter, or about 3 percent of company volume, up from less than 1 percent in the same period last year, Krueger said.

He did not speculate on the outlook for BMW’s sales of diesel-equipped models but said the day will eventually come when the costs of continually lowering diesel emissions will be too high.

How to Fix ERR SSL VERSION OR CIPHER MISMATCH Error in...

10 Best Cities to Visit in the United States!