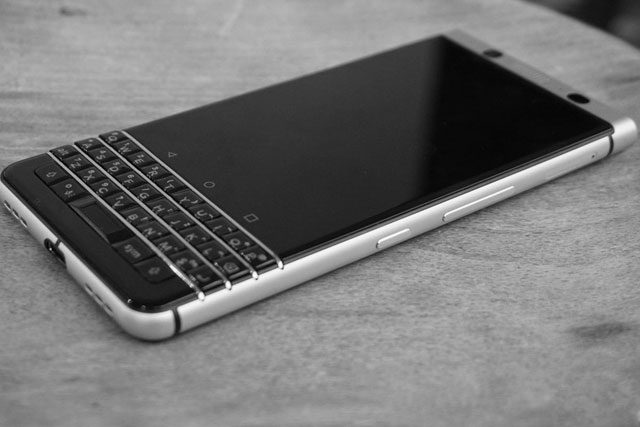 It’s no secret Kim Kardashian West loves her BlackBerry and nearly lost her goddamn mind last year when her last BlackBerry Bold died and she couldn’t find any more on eBay.

Well, Kim, I hope you’re reading this because everything is going to be OK again once the new QWERTY keyboard-equipped BlackBerry KEYone comes out in a few months.

Designed and manufactured by TCL Communications Technology (TCT), which now has the global rights to build and sell BlackBerry-branded phones, the KEYone (formerly codenamed “Mercury”) is the best marriage of BlackBerry and Android I’ve seen yet.

Sure, people said similar things about the BlackBerry Priv, but in my opinion, the KEYone looks and feels better. And at $549, it’s also more affordable than the Priv was at launch, which had a price tag of $699 (it’s $499 now).

At Mobile World Congress 2017, I got to take a closer look at the KEYone and I have to say, it’s really nice…if you’re still into BlackBerrys and a physical keyboard. TCT went through great lengths to give the KEYone a premium feel and it definitely shows. The aluminum body feels super solid, and the grippy soft-touch back is a nice throwback to old BlackBerry phones. BlackBerry diehards will love that there’s a customizable “Convenience key” on the right side for assigning functions like opening features (i.e. flashlight, messages, etc.) and launching apps.

On the front is a sharp 4.5-inch (3:2 aspect ratio) display with 1,620 x 1,080 resolution and 434 ppi. While it’s not the best display I’ve seen on a phone, it’s not garbage either. Colors looked good and viewing angles seemed wide enough.

Inside, you’ll find a Qualcomm Snapdragon 625 processor, 3GB of RAM and 32GB of storage (expandable via microSD card up to 2TB). The specs don’t compare to high-end Android phones that use Qualcomm’s fastest chips, but you might not even care because Android 7.1 Nougat flies. In my brief time poking around with the KEYone, everything felt smooth, even when I had two apps open at once. The battery is pretty hefty, too: 3,505 mAh. TCT wouldn’t tell me any specific battery life figures but said it’d last all day. The phone also supports Quick Charge 3.0 via its USB-C port, which should be able to juice your phone up to 80 percent in about 35 minutes.

And… there’s a headphone jack, which I have to keep reminding people, is necessary to point out for a 2017 phone.

For photos and videos, the KEYone has a 12-megapixel back camera with dual-LED flash and an 8-megapixel front-facing camera for selfies. Both cameras have larger-than-normal micron pixels to let in more light for better low-light photography, and TCT even goes as far to boast the rear camera is the same exact camera sensor as the Google Pixel’s.

But here’s the thing: Just because a phone has the same camera sensor doesn’t mean the pictures will come out the same. Superior software processing now plays a key role in helping create better photos. For example, on paper, the Pixel’s camera should perform worse than the iPhone 7 and Galaxy S7‘s cameras which have larger apertures to let more light in, but thanks to Google’s intelligent algorithms it actually takes better photos most of the time by stacking multiple shots into one.

Photos from the KEYone looked pretty average, but then again the dimly lit hotel room I was in wasn’t exactly an ideal place to test the cameras. I can, however, tell you the autofocusing is quick, letting you fire off shots quickly.

And now for the best part: the keyboard. It’s really good. I still think the BlackBerry Bold had the best physical phone keyboard ever, but the KEYone is great, too.

The flat, glossy keys are just like the ones on the Priv — they’re a little mushy, but once you get the hang of typing with a physical keyboard again, you’ll be banging out emails like it was 2005.

Also the same is the keyboard’s second function as a touchpad; you can swipe in all four directions to scroll up and down on pages and between screens, and it’s super responsive. Each of the 52 keys is also customizable, so you can program them to, say, launch an app. For example, you could program the “I” key to launch Instagram with a long press.

Another thing I liked is where the fingerprint sensor is. TCT’s cleverly hidden it within the space bar key so that you can just rest your finger (no press required) on it to unlock.

As you can probably tell by now, the KEYone looks like a phone BlackBerry should have released years ago. It’s got nice hardware, possibly the best security, and runs Android so you have access to tons of apps (the biggest problem BB10 had).

Winning back consumers won’t be easy. In fact, with nearly zero percent of global smartphone sales in Q4 last year, according to the latest Gartner figures, it seems like an impossible task. Outside of enterprise customers, who the heck would even consider buying a BlackBerry? While the KEYone is targeted at business folk, TCT tells me its long-term goal is to restore the BlackBerry brand to its former glory.

Are Edible Bubbles The Future of Packaged Water?