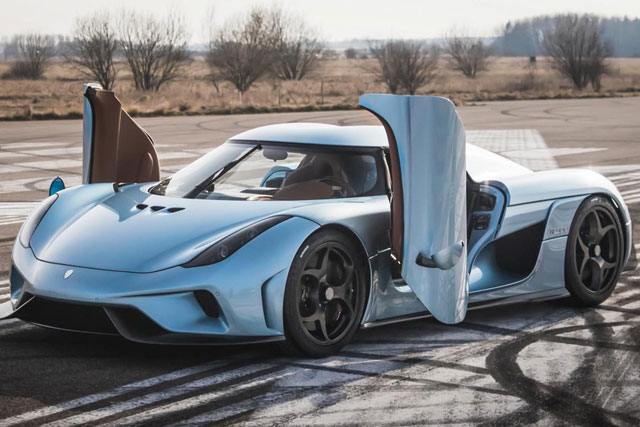 Until the Huayra Roadster turns up, celebrate the best and brightest of the drop-top hypercar brigade. The SV badge isn’t handed out lightly. SuperVeloce, which translates as Superfast (Hm, looks like Ferrari and Lambo should have a quick chat about naming rights), the SV badge means a Lambo that’s lighter, faster and altogether hairier than the standard article.

And, being a Lamborghini, this is usually exactly what you want. So, thanks to a new exhaust system, the Aventador’s 6.5-litre V12 gets another 49bhp and a sound that’d send wild animals scurrying for cover. And that’s the kind of thing that’s easy to enjoy when the roof isn’t attached. The noise, that is – not the 740bhp bit.

To save weight, there’s a surfeit of carbon fibre, both in and out of the cabin, for a 50kg saving over the standard Aventador Roadster. It is then, as you’d expect, quite a potent thing. And perhaps best enjoyed with as much sun,wind and V12 noise as you can muster. Like all truly great Porsches, there’s a lot of motorsport under the flanks of this V10-powered weapon.

Yep, just like the 550 Spyder, the Carrera GT had its roots in Porsche’s motorsport programme. It can trace its roots back to the GT1 and LMP1 race cars, as well as a version of the V10 engine from the 1991 Arrows F1 car.

The story goes that a 5.7-litre version of the racing V10 was built to go in a future Porsche Le Mans prototype, but the project was shelved so that Porsche engineers could focus on the Cayenne. As it turns out, that was perhaps the best fiscal decision Porsche ever made. Exceptional sales of the SUV meant that Porsche was flush with cash and free to do something fun.

So they dialled in the insanely free-revving V10 at more than 600bhp, fitted a six-speed manual and slotted the whole lot into a carbon fibre subframe, which is bolted to a carbon fibre chassis. Then they put it together with some of the best-looking bodywork to come from Porsche at the turn of the millennium. Porsche was fanatical about saving weight – forged magnesium this, titanium that and so on – but they still made sure you could take the roof off. And bless their hearts for that. Yes, the name is slightly troubling. If you were to order the same from McLaren, for instance, it’d be called ’The McLaren Open’. Which sounds like they’ve sponsored a tennis match.

The rest, on the other hand, is certainly not troubling. A 6.2-litre Ferrari V12, for instance, teamed with Ferrari F1 KERS tech for 950bhp, zero to 124mph in seven seconds or so, and a top speed of 217mph. Then there’s the prancing horse badge, which is powerful enough to sell awful baseball caps and key fobs, let alone one of the most technologically advanced Ferraris to ever wear number plates.

As long as you’re comfortable being the centre of attention basically everywhere you go – and maybe even Monaco – it’d be difficult to feel like you’d missed out, even if you passed by every other car on this list. Let’s get something out of the way – long tails are cool. Think about the Porsche 917, for instance, the Jaguar XJ220 or the McLaren F1 GTR ‘Longtail’.

It’s that final one, actually, that inspired the 675 LT. After McLaren (the company, that is) won its debut race at 24 Hours of Le Mans in 1995 with a fairly standard McLaren F1 (quite a feat, we’re sure you’ll agree), they decided to lighten the it and add 25 inches of bodywork to the back end, to reduce drag and improve downforce. Why? Well, they wanted to keep pace with the purpose-built race cars that bent the FIA rules to compete as road-based racers – we’re looking at you Porsche and Mercedes.

To celebrate the F1 GTR Longtail’s success (and wave goodbye to the 650S road car before the new one debuts), McLaren revived the name with the 675LT and, happily, the 675LT Spider. If you managed to nab one of the limited-edition roadsters (like a certain Mr J. Button did), you’ll be in perhaps one of the best McLaren road cars of all time, up there with the fearsome P1 and F1, but for a fraction of the price. We absolutely love it. It’s fairly easy to imagine a few hundred horsepower. Chances are that you’ve experienced it a few times throughout your life. And, for most of us, it feels like a nice amount.

Well, now quadruple it. Yes, it’s that magic, 1200bhp figure of the late-model, tuned-up Veyron, and is something else entirely. And exposing your delicate human form to a cabriolet with that kind of power is a frightening concept.

Or, at least, it should be. Yes, the Veyron Grand Sport Vitesse is the ne plus ultra of open-top motoring, with the kind of figures that should not be combined with a convertible top by anyone whose last name isn’t Knievel.

But, because Bugatti’s engineers have taken every other facet of the £1.14m hypercar to its logical extreme, the SuperBug is far less intimidating than you’d actually expect. If anything, it’s easier to pick up a drop-top version of the Veneno than the hard-top. Yep, an exorbitant nine were made, a surfeit compared to the three hard-top Venenos, both produced to celebrate 50 years of Lamborghini.

And the question we’re asking ourselves is this – is it the wildest road-going Lambo ever? By bodywork alone, it’s halfway there, but the 740bhp V12, 220mph top speed and racing-spec aerodynamics bring it to within an exhaust blip of the crown. And taking the roof off? That might be the clincher. Okay, this one might be a bit tricky to get hold of. And then it’ll keep being tricky, basically every day of your life from then on. Let’s explain why, shall we?

Firstly, there’s the matter of getting one. There are just six CLK GTR Roadsters in existence and only one in right-hand-drive, specially commissioned by none other than the Sultan of Brunei.

They cost more than £1m when new, and were essentially drop-top, road-legal versions of the GT Championship-dominating race cars. So, they had an exceptionally loud racing gearbox, that whined like a toddler leaving a toy store, and there was almost nowhere to put any of your things.

A 612bhp 6.9-litre V12 was wedged into the back of the AMG-built race car, and a few small concessions to comfort – air conditioning, for example – were wedged into the front, in between the racing-spec suspension. So, there was a small pod built into each of the deep door jambs where you could store anything up to a few pints of milk and a loaf of bread.

The upshot of these sacrifices in practicality was that you were getting a genuine race car with serious pedigree. You could also expect to go from zero to 125 in less than 10 seconds and on a top speed of 200mph, by which point you could reasonably expect your hair to be plucked from your head by air pressure alone.

So, not an easy beast to live with. But definitely the perfect counterpoint to the idea that ‘convertibles are hairdressers cars’, no? “It’s the very last Zonda,” we were told. “No more after this one!”

To be honest, we really wouldn’t mind if Pagani had kept making Zondas until kingdom come. Because there’s something about a £1m hypercar with a 670bhp, 7.3-litre V12, a raft of exquisite materials and a carbon air intake jutting out over a convertible roof.

The Cinque was one of the most mental Zondas, which is certainly saying something. It was based on a lot of the tech from the other-worldly Zonda R, including the carbon-titanium weave in the chassis and revised aerodynamics for even more lightness and speed – 1210kg and in excess of 217mph, if you’re interested in specifics.

It’ll be a tricky bugger to get your hands on, as just five Cinque Roadsters were made. Of course, now that the Huayra Roadster is coming, maybe a few businessmen and plutocrats need to make space in their garages? Okay, so they probably won’t have the posing potential of a Bugatti or Pagani. But their potential really makes itself felt just about everywhere else.

They have the same advanced suspension and brakes as a race car, the dexterity of a particularly athletic cat and phenomenally powerful engines wedged inside their exoskeletons. Yes, exoskeletons. Like from Aliens, but in this case, your face is buffeted by wind, water and mud, not hugged by the most frightening concept ever devised by HR Giger.

If you want to tear it up on the track, there’s the Atom. If, on the other hand, you want to tear up your own track through the middle of a field, there’s the Nomad. Neither is particularly pleasant during inclement weather, but drop-tops (or in this case, no-tops) are made for sunny days, right? When numbers get big enough, they begin to become almost entirely meaningless. Case in point: what exactly is 1479bhp and 1465lb ft? You know, except for the blindingly obvious answer, which is ‘a lot’.

Well, the other obvious answer is ‘exactly what a Koegniggsegg Regera has’,  and it’s a cornucopia of things that feel like they’re plucked from the bleeding edge – carbon-fibre wheels that take a week to build, a 5.0-litre V8 that somehow makes 1160bhp and F1-style battery cell tech for the hybrid system. And then there’s the gearbox – or lack thereof.

Yes, where we’re going, we don’t need… gearboxes. In case you haven’t read our first drive, Christian von Koenigsegg wanted the on-demand poke of an electric car, without the delay in performance – however infinitesimal it may be – and the added weight of a traditional gearbox. So the Regera just doesn’t have one. Instead, there’s a kind of torque converter, like what you’d find in an automatic gearbox, that allows slip up to 30mph. From then on, it’s completely locked to the 1479bhp hybrid drivetrain, and may God help your rear tyres.

And, because it’s a Koenigsegg, you get to experience the whole lot with the roof down. Magic.