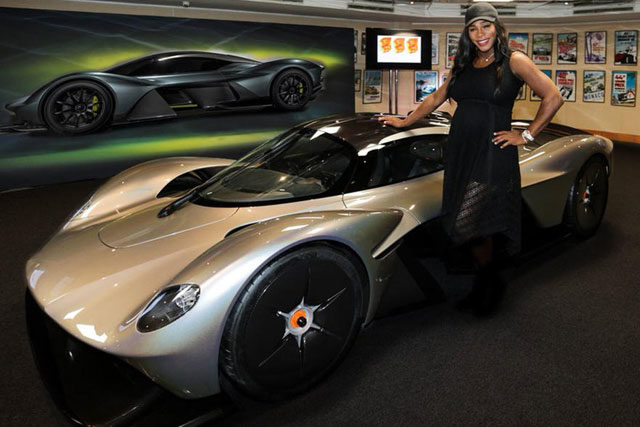 The Aston Martin Valkyrie has been shown in its most production-ready form yet, with headlights on the car for the first time.

Revealed in a promotional shot with tennis player Serena Williams, the headlights replace the placeholders put on previous development cars, and while we believe they will make it onto the production car, have not been finally confirmed by Aston Martin as the final pieces.

The car is around 90% production ready, according to an Aston Martin spokesman; the remaining 10% is likely to be final tweaks to the car’s aerodynamics as the development of the lights and other road-essential features are rounded off.

The Valkyrie hypercar will mate a Ricardo gearbox to its naturally aspirated 900bhp Cosworth 6.5-litre V12, following a new deal with the British engineering company.

The forthcoming hypercar, which has been co-developed by Red Bull Advanced Technologies, will use a seven-speed automatic gearbox that’s designed and built by Ricardo. The British firm has experience that spans from motorsport to building engines for McLaren road cars.

The confirmation of the supply deal between Aston Martin and Ricardo is another piece of the puzzle in the production of 150 road-going and 25 track-only Valkyries commencing next year.

No pricing has been revealed, but a figure of £2-3 million is likely. First deliveries are due in 2019. Previously referred to by its internal codename AM-RB 001, the V12 model will be built upon a carbonfibre Monocell that is provided by longstanding Aston Martin partner Multimatic. The car’s kerbweight is therefore expected to be less than one tonne, and Aston Martin backs this up with claims for a 1:1 power-to-weight ratio.

Braking will be handled by Alcon and Surface Transforms calipers and carbon discs, while Bosch will supply the engine control unit (ECU), traction control unit and electronic stability program (ESP) systems. The tyres are Michelin Pilot Sport Cup 2s wrapped around 20 and 21in wheels. Wipac, a British LED lighting manufacturer, has developed the car’s headlights and tail-lights.

Red Bull Racing chief technical officer Adrian Newey said of the partners: “Much like in Formula 1, designing, engineering and building a car like the Valkyrie is a massive team effort. To achieve great things you need to surround yourself with the best people.

“Experience, creativity, energy, diligence and perfectionism are absolute must-have qualities in every area of the project. Having great technical partners such as those working with us is both reassuring and motivating. Together we aim to produce an innovative piece of engineering art.” Aston Martin vice president David King said: “Making the Valkyrie presents huge challenges. It’s a real test of everyone involved, but that’s as it should be, for we’re genuinely raising the bar with this car. That’s what makes the project so special, and why having the right technical partners is so critical.

“Some of those names we’re working with are long-standing suppliers of Aston Martin, but there are some new names in there, too. Whether forging fresh partnerships or building on existing relationships, this project is a shared engineering adventure that we’re all relishing.”

The Valkyrie name stems from Norse mythology and translates to ‘chooser of the slain’. Aston Martin chose the name of to signify the car’s role as being its most potent product yet.

Chief creative officer Marek Reichman said: “The Valkyrie is an incredibly special car that demands an equally remarkable name; an uncompromising car that leaves nothing in reserve. The connotations of power and honour, of being chosen by the Gods, are so evocative and so pertinent to a car that only a fortunate few will ever experience.”

How To Remove Low Quality Backlinks From Your Website To Improve...