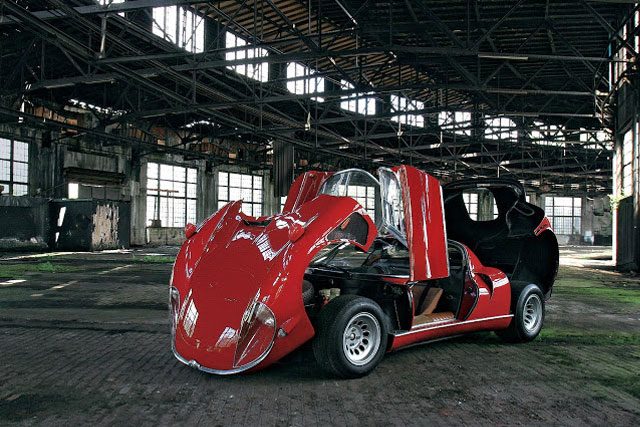 The Alfa Romeo 33 Stradale is an extremely rare and cool road car built by Alfa Romeo. Only 18 are reported to have been made, plus three design studies based on the 33 Stradale the 33.2, Iguana and Carabo.

The Stradale, first built in 1967, was based on the Autodelta Alfa Romeo T33 racing car. The car, designed by Franco Scaglione, and built by Carrozzeria Marazzi, made its debut at the 1967 Turin Motorshow. Built in an attempt by Alfa to make some of its racing technology available to the public, it was the most expensive automobile for sale to the public in 1968 at US$17,000 (when the average cost of a new car in 1968 was $2,822).

The Stradale is believed to be the first production vehicle to feature dihedral doors, also known as butterfly doors. The Stradale also features windows which seamlessly curve upward into the ‘roof’ of the vehicle.