Airline cabins of the future: A new golden age of travel? 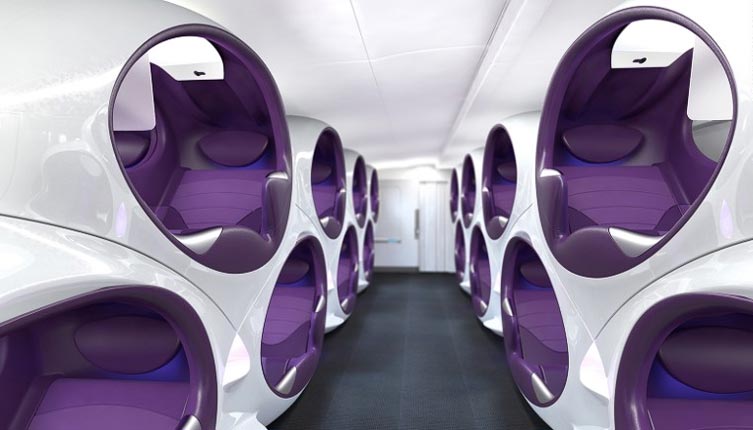 Air travel photos from the 1960s show smartly dressed, champagne-sipping passengers in spacious airliner cabins. Contrast that with today’s cramped seats and overcrowded airports and it looks like our flying experiences are getting steadily worse.

But is this based on reality? The aviation industry has been investing massively to prove nostalgic travelers wrong. Yes, aircraft may still look similar to those of the so-called golden years. But every single aspect of the air travel experience is currently being overhauled — all driven by technology.

Right at the forefront are airplane cabins. And key to their transformation is wireless connectivity.

With virtually every passenger toting a smartphone, tablet or laptop, inflight Wi-Fi is opening up new ways to engage with air travelers and redefine the flying experience. Panasonic’s Waterfront system allows passengers to use their mobile devices to control an aircraft’s built-in entertainment. Mobile tech already plays an important role in enhancing travel, from electronic boarding passes to last-minute bids on biz class upgrades. Some airlines, such as KLM, have even started sending boarding passes and flight alerts through a dedicated airline Facebook Messenger chat bot. But the one area where mobile can become truly transformative is inflight entertainment, with personal devices becoming gateways to a whole range of up-in-the-air services. While built-in in-flight entertainment systems are unlikely to vanish, particularly on long-haul flights, they can work in tandem with the passenger’s own devices.Thales and B/E’s Digital Sky seats make use of larger, higher-res screens. Netherlands-based AirFi is primarily equipping low-cost airlines that often fly short-haul single-aisle aircraft and don’t have entertainment systems. The company’s portable wireless system beams pre-loaded content onto passenger devices. The AirFi terminal behaves like a normal Internet router.

It’s lightweight and can easily be installed in a luggage compartment. AirFi CEO Job Heimerikx says it’s a cost effective and flexible way to provide quality inflight content to the short haul market.”There are a customer service and a commercial angle to our system,” he says. “Passengers can access a broad range of movies and other sort of entertainment, but they can also use it to order food or shop duty free. “It’s like an evolution of the traditional inflight magazine, but just as it happens at online stores, you can make it really personal.” This concept thrives on having a captive audience.

But would it still work if users had a full inflight broadband Internet connection? Passengers might be more interested in binge-watching their favorite TV series instead of booking airport transfers or ordering an extra cup of coffee. AirFi offers a cheap alternative to inflight entertainment systems, streaming direct to phones and tablets. “If airlines can’t stop the passenger from going to Amazon or zoning out on Netflix for three hours… and they can’t offer something at least equally interesting in terms of intuitive retail and custom content, they are missing a number of tricks” says Maryann Simson of Runway Girl Network, a leading aviation news website focusing on passenger experience. It’s a theory that’ll get put to the test soon.