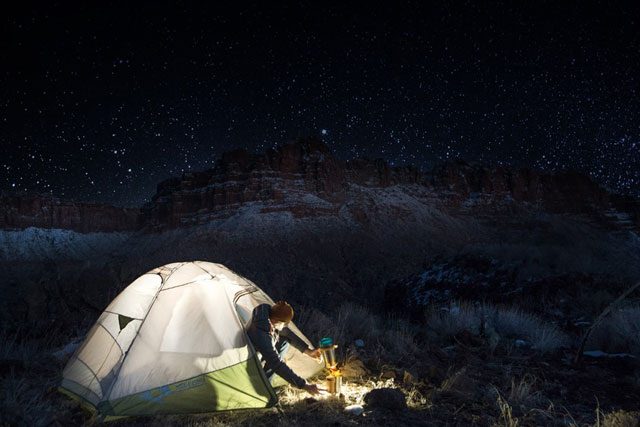 Camping Stove that can Also Recharge your Gadget

The BioLite CampStove 2, available for $130, employs thermoelectric technology to turn cooking heat into electricity. It can run the internal fan that turbocharges your fire, and via the built-in USB outlet, power an assortment of optional LED lights. It can even recharge your phone, no matter how deep into the woods you’ve gone.

The 2-pound stove comes in two parts. Its body, a three-legged steel canister, is about the size of a large can of Foster’s beer; the second section, a power module, is equipped with three columns of LED lights to gauge your fire’s strength, fan speed, and available battery life. The module nests neatly within the stove body for easy transportation and storage.

When you’re ready to begin cooking, the fire is easy to get started. Hook the power module to the stove body and fill the combustion chamber with wood and kindling—twigs, sticks, even pine cones will do the trick—and ignite. Then, a four-speed fan forces air into the combustion chamber through holes that encourage more efficient burning, up to 95 percent less smoke emissions compared with a regular wood fire. Capable of heat at 10,000 BTUs, the stove can bring a liter of water to boil in less than 5 minutes, but you can control the intensity of your fire by adjusting the fan speed. The hotter the fire, the faster the battery power fills up.

Beyond the stove, Biolite offers an entire ecosystem of accessories, including a 1.5-liter kettle pot with optional French press plunger and a grill that is supported by two fold-out legs. It is big enough to cook four hamburgers or six hot dogs at a time—or even one large, split eggplant—evenly and efficiently. It’s easy to feed more wood fuel into the burn chamber, even while grilling, so there’s no worry about running out of heat before your burgers are cooked through. And because the fire recharges the battery, there is no practical time limit to how long you can use it.

The electricity is generated via a thermoelectric process known as the Seebeck effect, a phenomenon that converts a difference in temperature to electrical power. At full blaze, you’ll get about 3 watts of electrical output. Plug your phone into the built in USB charging jack, and it will charge in about the same time that a typical portable charger could do the job. And because the power module has a built-in 2600mAh battery, you can draw power when the stove is not being used.

As much they want to juice up your camping trips, Biolite has an even bigger mission in mind. The company’s clean cooking and energy technology is making its way, through NGOs and micro-lending organizations, to families across India, sub-Saharan Africa, and other parts of the world where electricity is scarce and where indoor, open-fire cooking is a source of chronic respiratory illness. As great as this quick-lighting, power-producing, anything-burning camp stove is on its own, that bigger mission might be the more compelling thing to ponder over morning coffee in the great outdoors.

How Will You Choose The Best Exterior House Paint?

4 Unique Ways Exhibition Preparations Can Be Helped by IPad Rental...