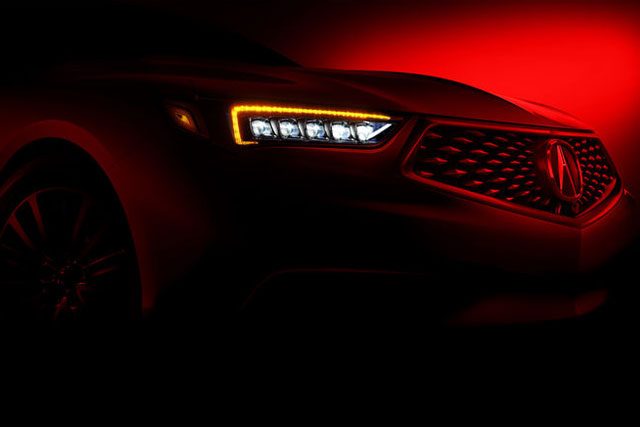 The Precision grille is spreading throughout Acura’s lineup, and as we can see from this teaser, the TLX sedan will be the next model to receive a styling update when it debuts at the New York auto show on April 11.

Just like on the 2017 MDX, Acura’s polarizing shield or “beak” grille is swapped out for a pentagonal unit inspired by the 2016 Acura Precision concept. The Jewel Eye LED headlights are retained, but tweaked with new LED daytime running lights that line the top of the housing. Acura says to also expect new premium features and technology on the 2018 TLX.

“The 2018 TLX will receive new styling elements that ratchet up its emotion and reflect Acura’s focus on Precision Crafted Performance,” said Acura vice president and general manager Jon Ikeda, in a release. “Acura customers embraced the MDX when we raised its game with bold, new styling, and we’re pumped to show how we’re elevating the TLX experience.”

Acura will unveil the TLX at the New York auto show, and will live-stream the debut beginning at 4:45 pm EST on April 11. You can tune into the live stream here, and of course catch our New York auto show coverage at Motor Trend.